Chart patterns are used within the study of technical analysis to help traders understand and interpret market sentiment as well as to develop trading plans. Unlike technical indicators, identifying and analyzing chart patterns is qualitative (subjective) rather than quantitative. One trader might see a flag pattern whereas another might see a wedge or channel. With that in mind, it’s not enough to simply recognize a pattern. A trader must look at the bigger picture to validate it. This means first assessing the strength of a chart pattern and then use other forms of technical analysis, like analyzing indicators or price action, to confirm it.

In this article, we’ll take a look at what chart patterns are, identify some of the most popular patterns, and explain how to take trades based on them, as well as other important considerations.

What Are Chart Patterns?

Chart patterns are simply combinations of trend lines that are measured based on price action. For example, two converging trend lines may form an ascending triangle, descending triangle, or symmetrical triangle. These patterns carry insights into market sentiment. For example, an ascending triangle, with its higher lows and tightening price action at a previous level of resistance is a sign that bulls are gaining momentum and suggests the potential for price to break to the upside. Inversely, a descending triangle with its lower highs and consolidation at a previous level of support suggests that buyers are weakening and that bears are gaining momentum, potentially leading to a breakdown in price.

There are three types of chart patterns: 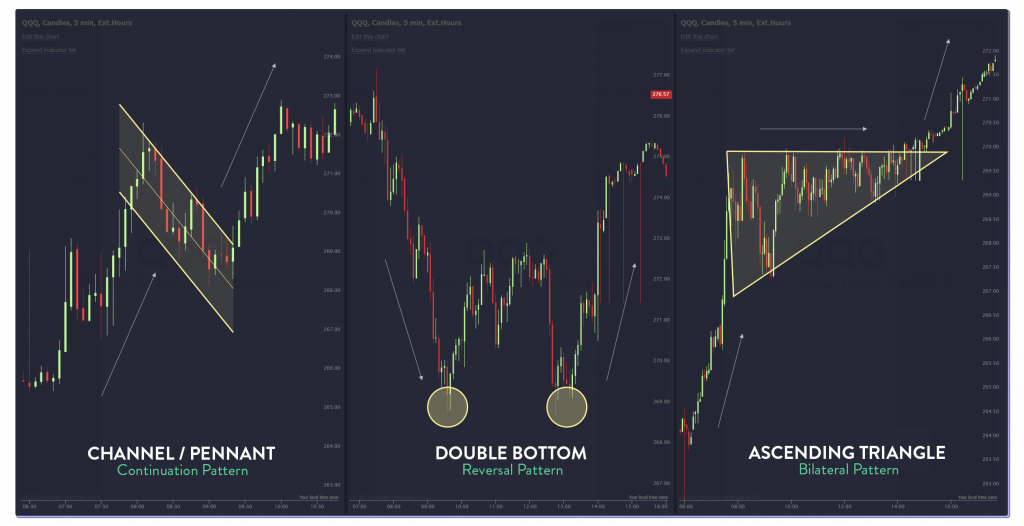 Many traders combine chart patterns with other forms of technical analysis. For instance, harmonic chart patterns incorporate Fibonacci sequences to structure retracements and projections. Other traders look for specific patterns that occur over a long period of time, such as Elliott Waves, which can be used to predict future price targets based on previous Elliot Wave lengths and their corresponding expectations.

Chart patterns are highly subjective in nature, which makes it challenging to automatically identify them. TrendSpider has been able to automatically identify and draw trend lines on a chart for some time, and with the addition of our new ‘Automated Chart Pattern Recognition‘ feature, our aim is to help traders more easily identify more complex chart patterns like the ones mentioned above. You can also create your own trend lines and add SMS or email alerts to them when a breakout occurs. That way, you can track many different patterns that are currently setting up without watching them every second.

There are many different chart patterns out there, but only a handful have reached widespread popularity due to their accuracy and utility. Let’s take a look at the five most popular chart patterns.

Price channels are continuation patterns created with two parallel trend lines. The upper trend line indicates resistance and the lower trend line indicates support. If the channel is sloping upward, it’s referred to as a bullish price channel, and if it’s sloping downward, it’s referred to as a bearish price channel. All channels can break in either direction, but often, ascending channels will ultimately resolve to the downside whereas descending channels will resolve to the upside. Horizontal price channels can resolve in either direction, depending on whether distribution or accumulation is occurring to create the channel. A breakout or breakdown from the upper or lower trend lines could indicate a reversal from the prior trend. 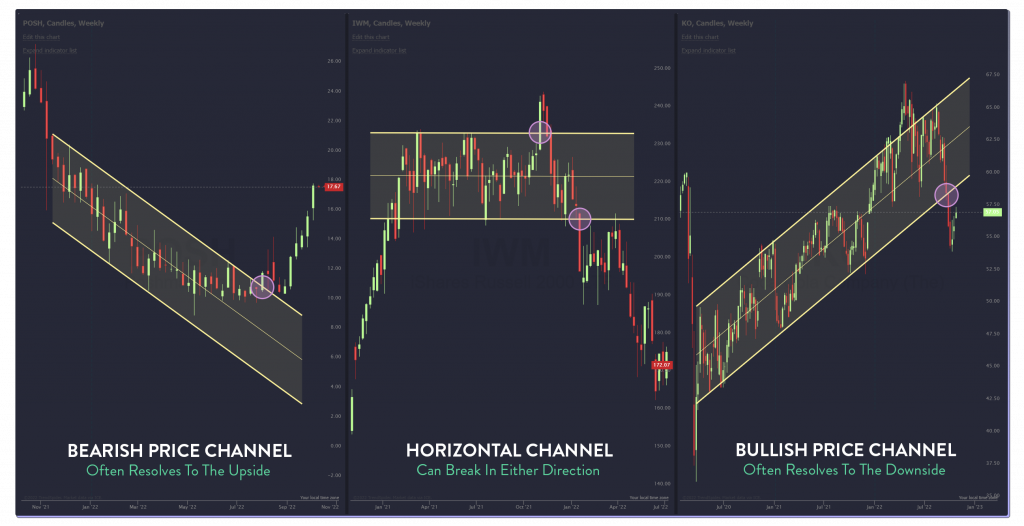 In the three charts pictured above, upper and lower trend lines create channels where the price has remained over a long period of time. Traders looking to profit from the current trend would use the patterns to buy near the channel lows and sell near the channel highs. Contrarian traders would be looking for a break in the trend, or price leaving the channel and then returning back to the top or bottom of the channel to retest it. Upon the retest of the top of the bearish price channel after a break to the upside, a trader would switch bias and go long. With the retest back to the bottom of the bullish price channel after a break to the downside, a trader would go short. 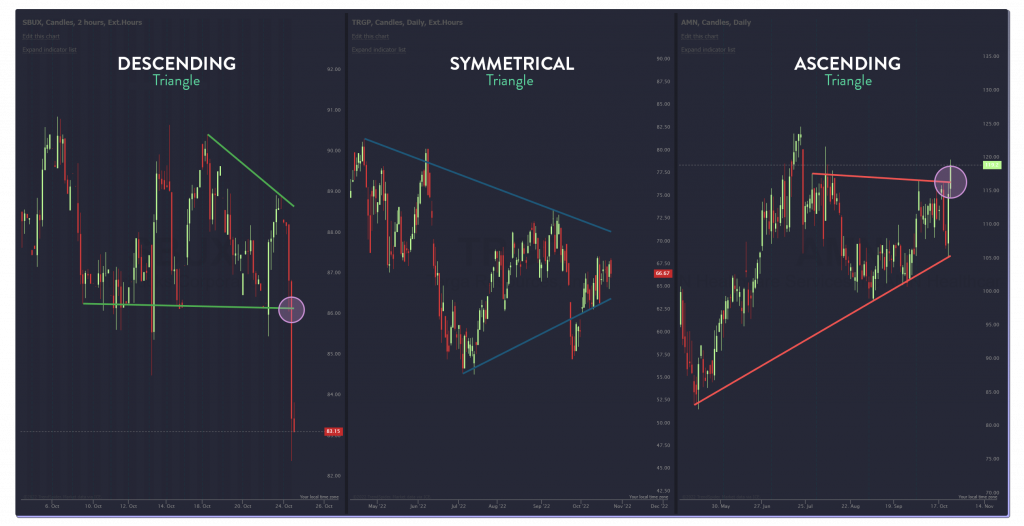 In all three of these formations, a hasty trader might look for a breakout or a breakdown from the triangle top or bottom as a reason to enter into a trade. If the breakout occurs on above-average volume, that would give a trader more confidence in the validity of the breakout or breakdown. A more patient trader might prefer to wait for a retest of the triangle, followed by a rejection or a bounce, to confirm that the old level of resistance is now acting as support or that the old level of support is now acting as resistance.

Rising and falling wedges can act as both reversal or continuation patterns, depending on where price is coming from before the pattern occurs and how it resolves out of the pattern. They consist of two sloped, converging trend lines. A rising wedge is formed by two upward-sloping trend lines, while two trend lines sloping down are referred to as a falling wedge. 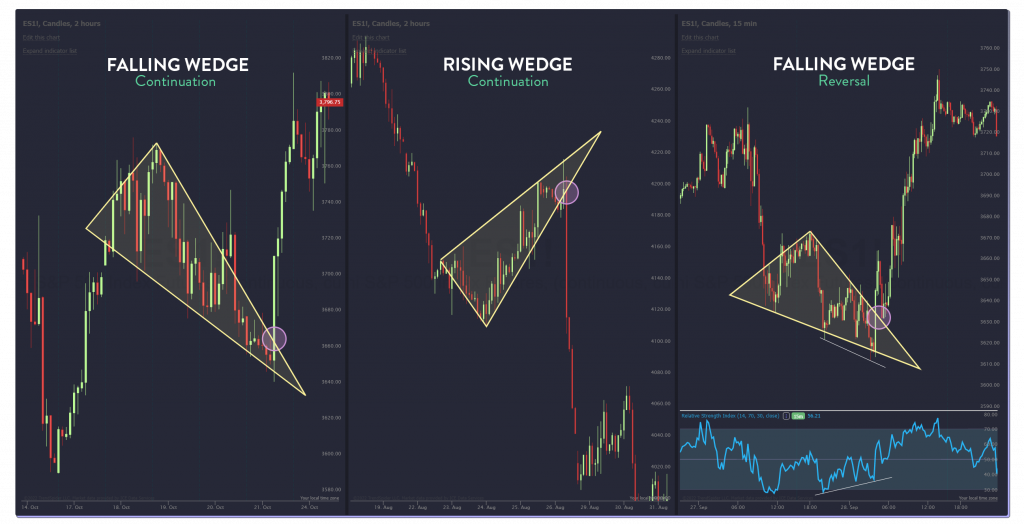 In the image above, we see instances of both continuation and reversal. On the left, price was increasing, then it pulls back and consolidates before breaking out of the falling wedge and continuing an additional leg higher. In the middle, we see the opposite. Price was decreasing, then it attempts to bounce and consolidates before breaking down from the rising wedge and making another leg lower. It is also not uncommon to see these patterns act as reversal points, like in the chart on the far right. Price was headed lower but is able to break out of the falling wedge to the upside and reverse course.

In general, falling wedges are considered to be bullish patterns while rising wedges are considered to be bearish patterns. That said, in order to determine if these patterns will resolve in continuation or reversal, it’s often wise to use additional indicators, like the Relative Strength Index, and then look for divergences between RSI and price. In the instance of a continuation, an additional indicator like volume might be used to confirm price breaking higher or lower. In the instance of a reversal, it can be tricky to buy the breakout or breakdown of the wedge, and it is often wise to let price retest the wedge before taking a position. A picture-perfect breakout and retest can be seen in the chart on the right.

You’re learning so much! Why not put it to use?

Double tops and double bottoms are reversal patterns that occur when price touches the same level twice before moving in the opposite direction. For example, a stock trending lower may make a low, rebound from the low and make the same, or nearly the same low once again at a later date to retest it and make sure it holds. The type of price action can occur at a previous high, also. 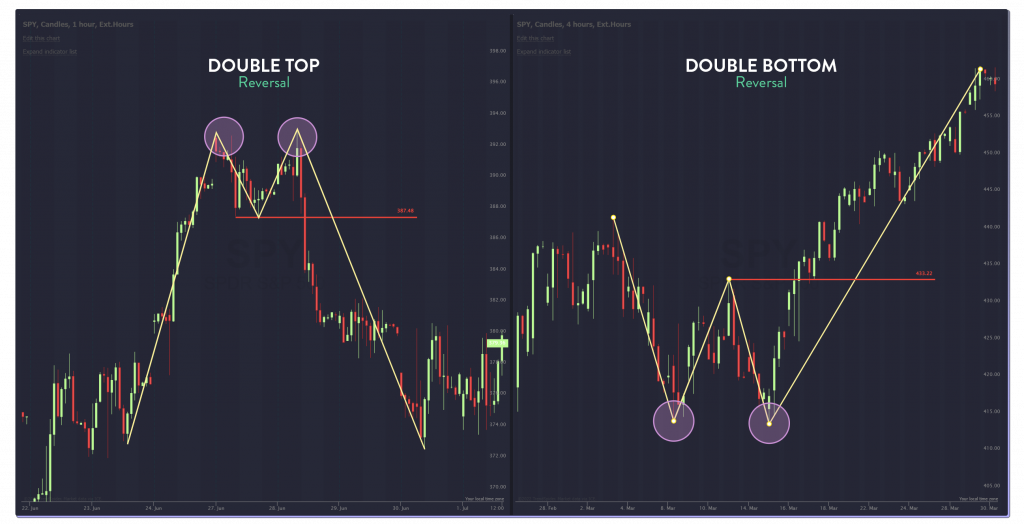 The head and shoulders is a reversal pattern that occurs when there’s a series of three highs or lows. The first and third highs or lows are roughly equal in price and the second high or low reaches an extreme. The combined events in price action resemble a head with two shoulders. Traders look for a reversal following the third high or low given the lack of momentum. The neckline is a trend line drawn using the two reaction highs or lows between the pattern. The validity of a head and shoulders pattern is strengthened if a lower low or higher high is made on the second reaction low or high in between the two shoulders. 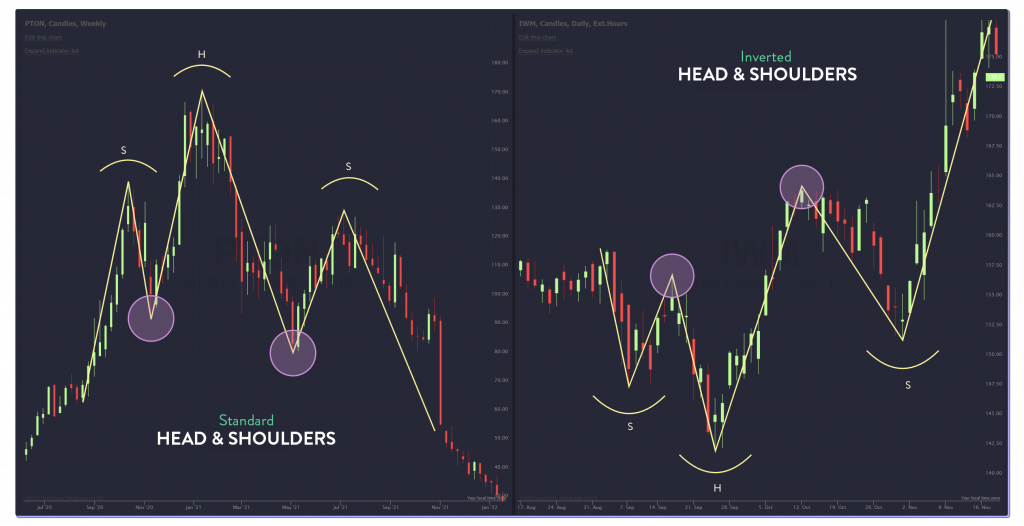 In the chart on the left, the key moment is the new low that’s made to begin forming the right shoulder. Once that new low is made, the stage is set for an eventual retest and failure at the high of the left shoulder. As upside momentum slows, price rejects very near the high of the left shoulder and a continuation lower begins. A hasty trader could take a short position on the retest of the left shoulder high, and a more patient trader might want to wait for the pattern to confirm. This occurs when a new low is made against the reaction lows in between the two shoulders circled in the image.

Chart patterns are subjective forms of technical analysis, which means that it’s important to validate the strength of the pattern and look for confirmation. There are many different ways to assess the strength of a pattern, but most of them boil down to touch points and volume. The strongest chart patterns are those where the price has reacted to trend lines many times on high volume.

Some important tips to keep in mind when trading chart patterns include: