Skip to Main Content
BlogTrendSpider User GuideWhat are Raindrop Charts and why should you care?

I am very proud to write about a new feature that we have been developing for many months, since last October to be precise. This is something that is very special to me because I am a volume-oriented trader, and I need to see price movements on volume in order to feel any conviction in my trade plans. This is a new feature, and it’s somewhat different than other features we have built. Instead of trying to automate something people already do – with this feature, we’re inventing something new — something we’re calling Raindrop Charts. In this post, I wanted to briefly tell you why I believe these are a big deal and why you should pay attention. 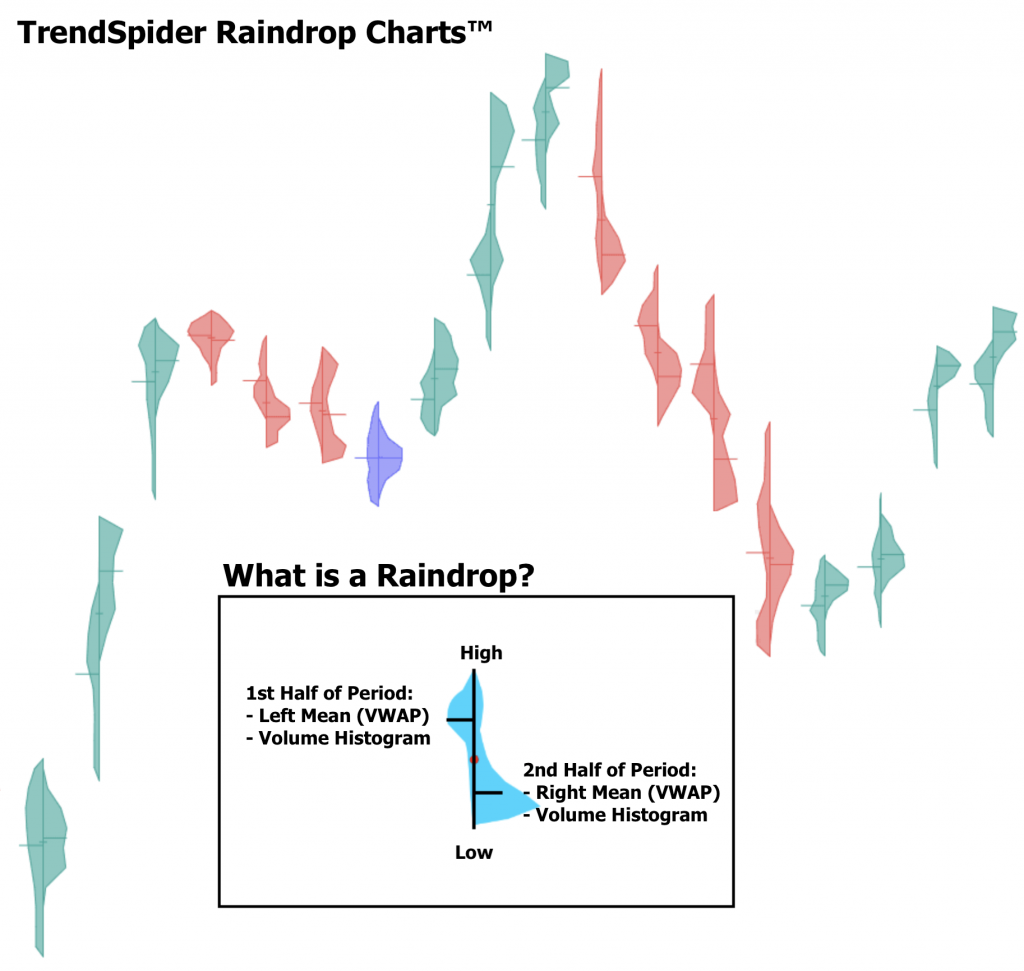 We all know that price movements are no more two-dimensional than they are easily explained. The price itself – containing all the information in the world – still is only one variable to consider. What I mean is, the laws of supply and demand tell us to pay attention to not just the cost, but the volume of buying and selling. Knowing how many bidders and sellers are in the market, and how their prices are distributed, is important for any sophisticated trader. I know volume is a big deal for me when I make trading decisions – I don’t like seeing big moves on light volume. It hurts my level of conviction because I know there are fewer buyers and sellers moving it, and a thinner market means it is easier for the rug to be yanked out from under you later.

But traditional candlesticks, Heiken Ashi, line, and hollow candle charts don’t really tell the full story. Sure, we have a bar chart under our candlesticks that shows the total sum of how many traders made up that move… but what does that really mean? Not much, other than there were a lot of people trading at that time. Which isn’t really meaningful on its own, especially if the move you are measuring volume for is a big move. How STRONG was the price movement? Is it likely to hold after being retested? This depends not just on volume, but the prices that the volume came in at. For that, we need a volume profile.

In other words – without context, without depth, this information can be misleading, can drive you to make the wrong trading decisions, and worst of all can cause losses. 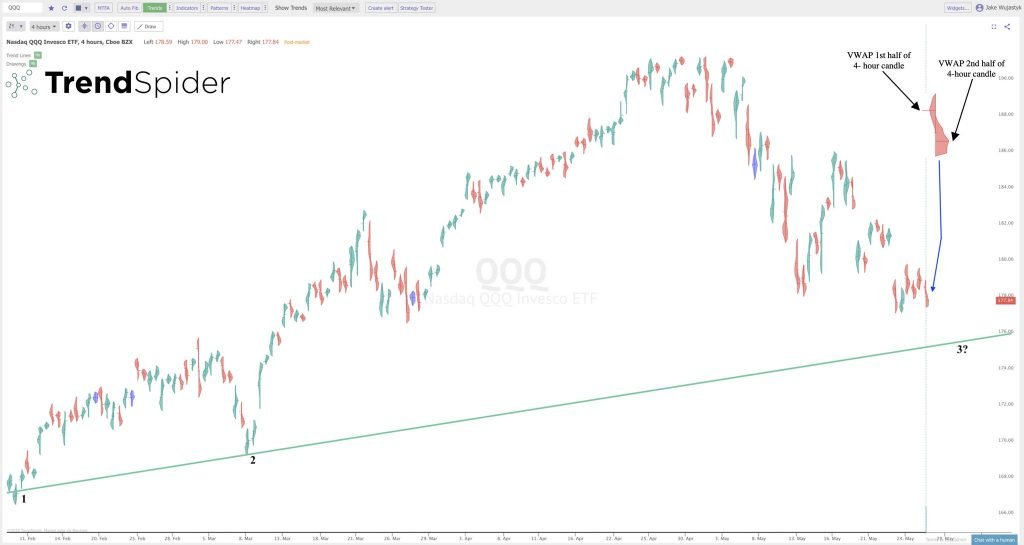 Let’s start with the premise that open and close prices are somewhat arbitrary. They don’t tell you much other than “this is what the price was at a specific time”. We need some kind of delineation on a chart, but why choose these two numbers? Likely because humans are linear thinkers and this is the most linear way to represent price movements.

The Raindrop Chart is a new type of financial timescale price chart that attempts to abstract away arbitrary constructs, such as open and close prices, to instead focus on changes in volume and market sentiment. In other words, Raindrop charts ignore artificial breakpoints wherever possible.

Raindrops do away with this uncertainty. They “abstract away” the arbitrary time-based open and close prices and instead focus on what matters – the consensus of the market during a specified period of time.

When the right and left VWAP prices are at the same level, it forms what is known as a Blue Doji Raindrop.

This is a true Doji, a true sign of indecision. 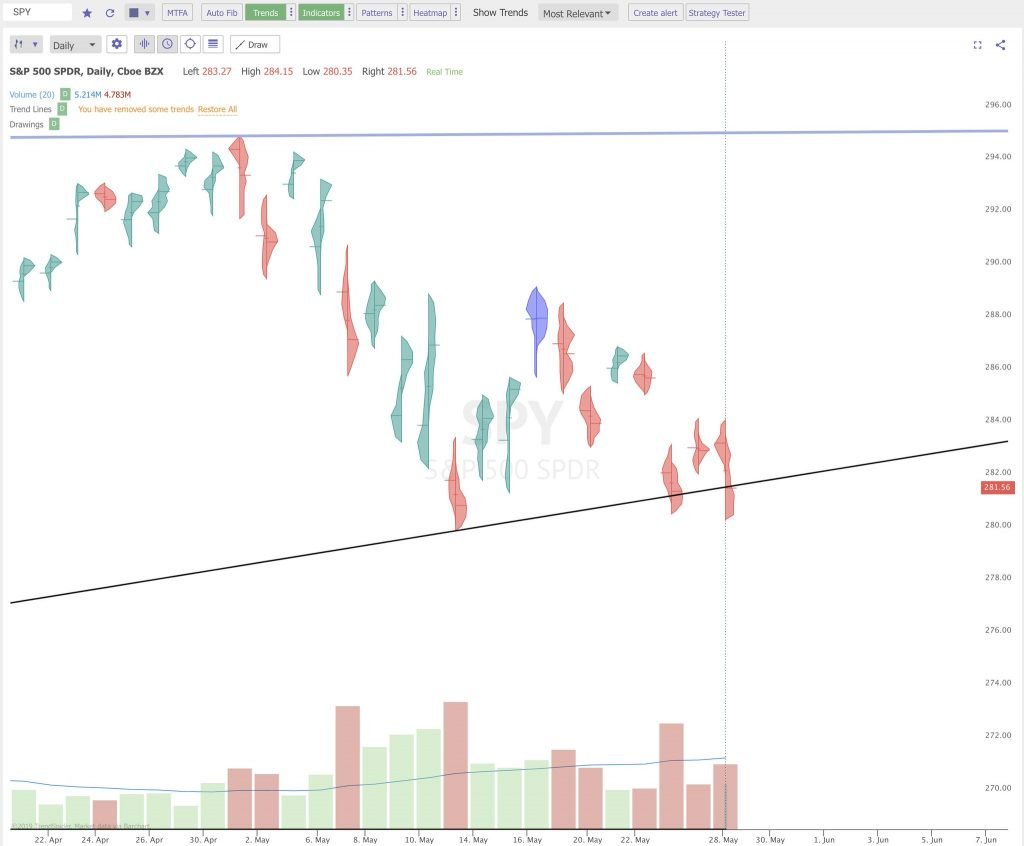 Raindrops enable this type of visibility. You can see not just that price moved, but how strong the movement was, which direction it moved, and see so with granularity in a way that was not previously possible before.

So the next time you are looking at a volume subchart and thinking “that’s a big move on a lot of volume” ask yourself – was it? Where, in that big move, was the volume concentrated, and how does that impact the story that the chart is trying to tell you?