When it comes to trading or investing in the stock market, the only thing that is 100% certain is that nothing is 100% certain. By the time a stock starts to break up or down, it may be too late to figure out what has caused the move to profit from it. The likely scenario is that it could be a number of factors ranging from social sentiment, technical indicators, systemic risk, or even the actions of a big institution or, in some cases, a large breakout trading chat room. This post focuses on some of those variables at work when nothing seems to make sense.

An Introduction to Chart Breakouts and Breakdowns

What is a Chart Breakout & Breakdown?

In the world of technical analysis, the two words “breakout” and “breakdown” are generally related to when a stock price breaks to the upside through a trendline or technical indicator (technical breakout) or to the downside (technical breakdown). These areas can be crucial areas to watch as many traders enact buy’s or sell’s near these levels which can cause a strong move in price depending on which orders traders have in (stop loss or buy order).

Have you ever found yourself not being able to sleep because of how excited you are about an anticipated stock move the next day? Was it because you saw on a chart on Twitter or StockTwits that just confirmed that there is no way your stock is going against you the next day? If so, you may be part of a phenomenon in which overly bullish or bearish sentiment from a technical chart causes a stock to go the exact opposite direction. This may seem counter-intuitive, especially as the logical explanation would be that if the crowd if very bullish or bearish, the price of that ticker should follow the sentiment. The problem is, as a trade becomes too popular, smart, big money traders (hedge funds, etc.) start to realize this and begin to add supply to the equation (start selling or scaling out of their position). As demand starts to wear off from the hype(as it always does), others start to realize that this may have just been a pump, supply begins to increase and natural economic forces begin to take over.

See below an example of SYN where the social sentiment and post volume has skyrocketed but the price is down for the day: 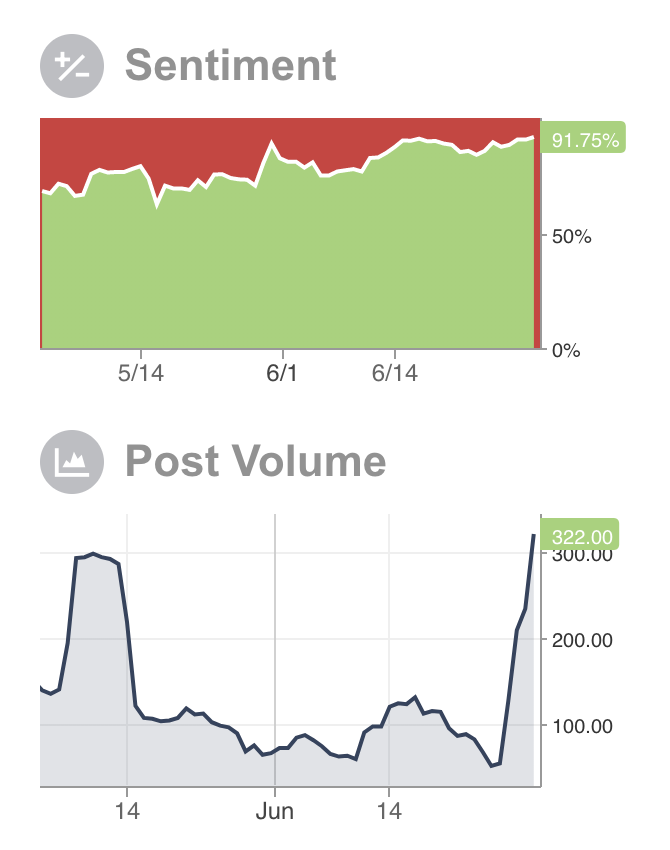 One of the main things to note is that even though this phenomenon isn’t biased to one industry or company size, this does happen much more often in the penny stock or small capitalization, low liquidity tickers.  The main reason for this is that retail traders generally like to trade smaller capitalization stocks and can make the market as hype grows across social media platforms. What seemed like a regular penny stock with low liquidity, is now a stock with over 50 million shares traded and a technical chart that has flown out of the window. The problem is, veteran and technical traders are looking for these things as they know the movement is not due to a fundamental change, but simply hype. This realization by a majority of the traders in a certain ticker can sometimes happen very quickly causing a massive selloff right back to where the hype started.

It is important to note that this effect doesn’t always happen in which the stock price moves the opposite direction of the sentiment. There are times that technical charts become so strong, the move becomes self-fulfilling due to so many people entering or exiting. The catch is, there are sometimes other variables at play to help this happen. The variables talked about next address how this phenomenon sometimes happens, and sometimes doesn’t.

Systemic risk is a potential risk in the market that has the ability to knock an industry or an entire economy off it’s axis. Examples of this are the 2008 Financial Crisis as well as the Japanese Fukushima disaster in 2011. Most of the time, systemic market risk is not a driving factor for prices in the financial markets. The status quo driver of the market is usually based on technical setups that become self-fulfilling. The market is able to move largely based on technical setups due to the massive amount of algorithms that now control the trading as well as the immense availability of technical analysis platforms to the average trader. These algorithms moving the market are owned by large institutions that have specific propriety technical metrics they are looking for. Since these institutions have such a large amount of capital, their transactions (buys or sells) will generally move the market causing a domino effect with smaller retail traders entering or exiting afterward.

Now that you know what generally moves the market in a normal status quo situation, it is time to explore why systemic risk can be so influential causing this to dramatically change.  The dramatic change is due to one word, “emotion”. Emotion is an incredibly powerful driver in the stock market and becomes very present during events that create systemic risk. These panic situations can create massive inefficiencies which cause stock prices to deviate substantially from their true intrinsic value. Generally, when panic or euphoria hits, all logic and reasoning that typically goes into stock analysis becomes irrelevant. As a technician, “systemic risk” is a nightmare especially because you may have a technical setup that has been materializing for months and it starts to breakdown due to panic in the market. On the bright side, these events are generally times that the professionals start adding to their positions. Over time, prices generally recover back to where they originally started to fall and even continue to move up.

See below an example of the FB weekly candle showing a large drop after the Cambridge Analytica news as well as rising interest rates (two sources of systemic risk in the market at the time). 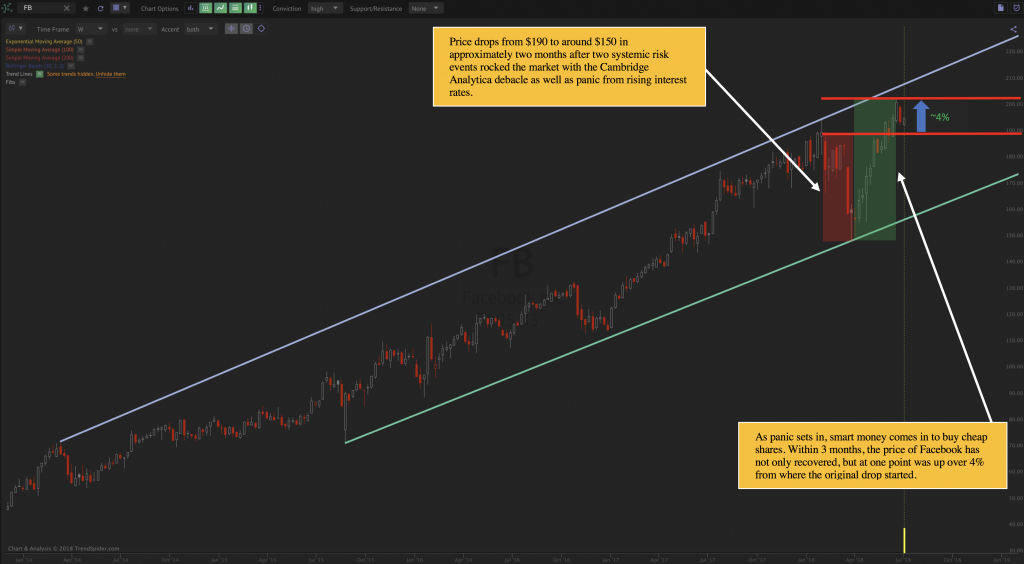 When it comes to trading in the stock market, there are many similarities to playing poker.  The largest similarity that trading has with poker is the act of bluffing. This bluffing move is notorious by market makers (institutions or hedge funds) who have enough inventory in a particular stock that they can move the price with ease; quickly creating either fear or euphoria. These large position holders can also create “bluffs” for technical traders and automated trading platforms that are looking at specific key levels to watch such as moving averages or primary support trend lines.

How is this bluff put into motion?

As technical analysis becomes more popular and readily available to the average trader, as well as the increase in social media exposure to the financial markets, what used to be a very lucrative talent has now become mainstream. This gives big money even more of an edge as now they can easily see the sentiment of retail traders as well as the general chart image that the masses are watching through social platforms such as Twitter and StockTwits. These bluffs can be either to the resistance side (faking out traders to buy once price breaks resistance and then sell into the new demand) or support side (faking out traders to sell once price breaks down through technical support on low volume and buying the heavy supply).

The easiest way for a market maker to bluff is if the order book (an electronic list of all the current orders placed on the bid and ask) is very thin or there are a lot of stop-loss orders below.

Let’s say that a fund starts purchasing a very illiquid stock at $0.90 and the price quickly moves up to the $1.10 area after they created a buying frenzy with retail traders thinking “someone knows something” seeing large buy orders start to go through. At this point, the institutions average is around $0.99 after purchasing 250,000 shares on the way up (at this point making the market). The market maker can see on the order book stop losses starting to pile up right at the current SMA (Simple Moving Average) at $1.08 with very thin demand below that. The market maker then starts to take profit on half the position (125,000 share market order) at $1.10 rapidly adding supply to the market which already has a large number of stop losses below. The large supply instantly added to the open market creates the price to drop quickly as stop losses start to trigger. (The issue many traders do not realize with stop losses is that a stop loss at $1.08 means once the price of the stock hits $1.08, the order becomes a market order, not a guaranteed sale at that price). If you are in line behind 100,000 shares already cued up, you really have no idea what your order will execute at if there is a very thin bid below.)

As price quickly becomes oversold, the market maker then sees buy orders start to trickle in around the psychological level of $1 and starts to outbid by 1-2 cents in very large orders. Once retail traders see these larger orders starting to come in, a new buying frenzy is created and the status quo once again changes to bullish. Due to this new round of buyers above $1.00, the price breaks out through the previous resistance of $1.10 because of the new “base” that has been created. (Someone who bought at $.90 is much more likely to sell at $1-$1.05 (up over 10% in profits) rather than someone who just bought at $1.00 after the spike (currently breakeven to 5% profit). If a large number of people absorb the supply at this $1 area from profit takers that were holding below .95, this $1 support level now becomes the new “base” for the price to hold.)

See how that works?

Putting It All Together

As you can see, the market is anything but a joy ride in the park. It can be very unpredictable even with the utilization of advanced tools and technical analysis resources. Market breakdowns and stock breakouts happen all the time. Every security experiences them from time to time. At the same time, trading is a constant competition with some of the best traders in the world — all trying to bluff, every opportunity they get.

On the other hand, the market is a wild rollercoaster of huge psychological status quo swings that creates uncertainty among the masses. The only thing 100% certain in the market is that as technology becomes more advanced and the world markets continue to grow, the variables outlined in this article will change and evolve over time as smart money continues to exploit the moves of the average retail trader.

Be smart out there. As they say: Invest Wisely.