Bollinger Bands (R) are one of the most widely used indicators in the financial markets by traders and automatic trading systems. These mathematically backed lines do not necessarily need to be fully understood to trade them, but it is important to know how they are created and how they can be used. We will recap what Bollinger Bands are from our last blog post and show what TrendSpider features will help you trade this indicator strategy most efficiently.

What are Bollinger Bands (R)?

To start, Bollinger Bands (R) are simply a group of 3 lines consisting of the:

Figure One: This image shows the 3 lines that consist of the Bollinger Band and how they are related to the normal curve in statistics. Notice the SMA is in between upper and lower Bollinger Band which are both two standard deviations from the SMA by default. 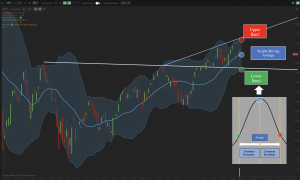 When it comes to trading Bollinger Bands, there are a few main strategies that traders use. The main two strategies traders implement is either trading the ticker once it touches the upper Bollinger Band or waiting until there is confirmation at the lower band.

Figure Two: This image shows the stock price being rejected hard off the upper Bollinger Band and then moving back down towards the SMA (20) and sometimes even the lower Bollinger Band. In this case, a short seller would profit from this setup from the price dropping. 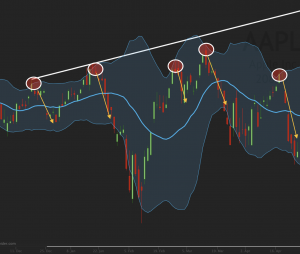 Figure Three: This image shows how the lower Bollinger Band can act very similar to the upper Bollinger Band price action. Notice every time the price touches this area, there is a corresponding jump in price back towards the SMA (20) above. 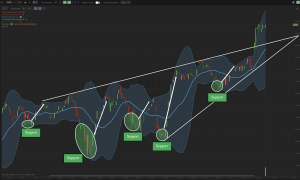 Setting Alerts on the Bollinger Band

One of TrendSpider’s most dynamic features is the ability to set price alerts on indicators and trendlines. We have now upgraded the system to allow users to set alerts on individual bands on the Bollinger Band. Follow these steps to set up your first alert!

Step One: First, the user must choose which line they would like to be alerted at. In this case, the upper Bollinger Band is selected. 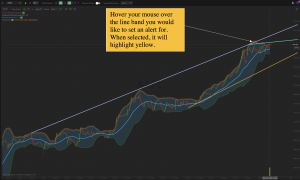 Step Two: In order the create the alert and customize the settings, right click on the line and click the “Create alert at this line” box. 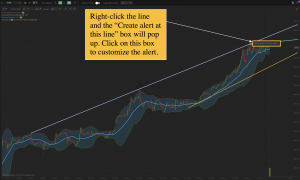 Step Three: After clicking the box to create the alert, a new page will appear with settings that you can change to match how you would like to be alerted. Shorter-term traders would likely want the alert to go off in the shortest time frame possible rather than having to wait for a longer time-frame candle to close. You can change the time frame at which the alert triggers at by clicking to the drop-down menu (shown by the yellow outlined box). 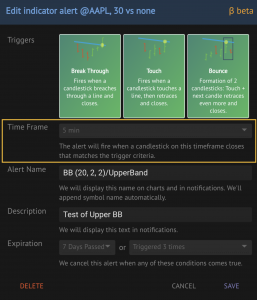 Another proprietary feature that TrendSpider offers is the ability to see indicators and trendlines from other time frames on a single chart. This enables users to see whatever timeframe candle they would like with any longer-time frame indicator or trendline. For example, if you are a day trader and want to see the 5-minute candle but also want to see the 30-minute Bollinger Bands, TrendSpider gives you the ability to overlay the 30-minute Bollinger Band onto the 5-minute candle. To learn more about this feature and how to utilize it on the TrendSpider platform, visit our more in-depth “Multi-Time Frame Bollinger Band” post.

Figure Four: This image shows the 30-minute Bollinger Bands overlaid on the 5-minute candle. The yellow boxes in the left-hand corner show the areas in which users can change the settings to other time frames and compare. 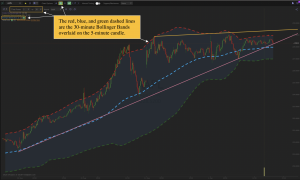 The TrendSpider platform is meant to help traders be more efficient by allowing the trader to step away from the computer without having to sacrifice possibly missing a trade. Even though our dynamic alerts will help traders save time and energy, they are not guaranteed to make money for anyone. Money is made in the market by having a solid consistent plan that has been backtested as well as not letting emotion enter the picture.