Skip to Main Content
BlogTrading TipsTrading Psychology Series: All About FOMO and the Dunning-Kruger Effect

Today we’re going to talk about trader psychology and FOMO… that thing we dread but sometimes trade on anyway for reasons we can’t explain, only to realize it later. You know, that thing!

First thing to note is that FOMO, or “Fear Of Missing Out”, has no technical basis. It has no fundamental basis. It is purely a remanent of the fact that we, as traders, are (unfortunately) still human just like everyone else. We are not algorithms. FOMO is a reactive, emotional response. But it’s natural and generally unavoidable unless you are cognizant of what it is and self-aware enough to identify when you’re falling for it.

Now FOMO comes in many forms. Let’s start with what we all have heard before. How many times has a trader you know said something that sounded like one of these:

The truth is, as much as we, as traders, like to tell ourselves that we are scientists, who are 100% objective in our analysis, we’re often not even close. We see what we want to see because we are human. We make mistakes because we are human. Finally, we overcompensate and end up trying to correct those mistakes — with even more mistakes.

Which leads to this chart of $BTCUSD, to indicate what the average, long-only new trader might do over time in a vicious, never-ending cycle of FOMO-Panic-FOMO-Panic. TL;DR: Buy high, sell low. Repeat, until broke. 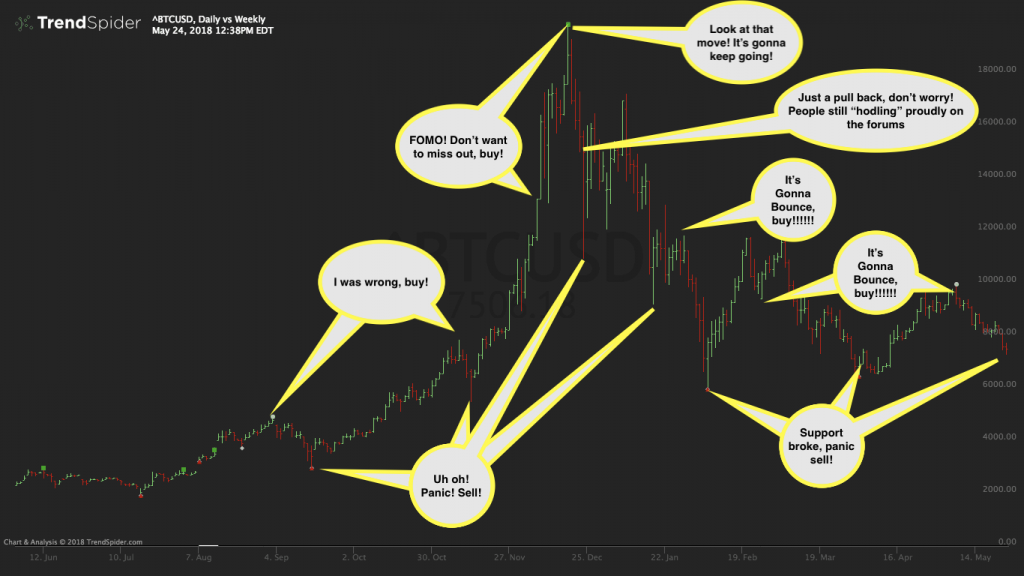 It takes a discipline and experience to recognize FOMO (not to mention all the other psychological traps that we are not even going into here) in real-time, during the trading day, in the heat of the moment — but it is even harder to recognize them over an extended period of time when it happens to you slowly. By the way, chasing a stock doesn’t necessarily mean jumping into a fast, intraday move. You can chase slower moves too, and while maybe a little safer, it is still ill-advised because while the run up will be slow in these cases, the fall will be sudden and fast as support gives way.

But, I’m digressing. Back to psychology…

I’m sure you’ve seen this before: 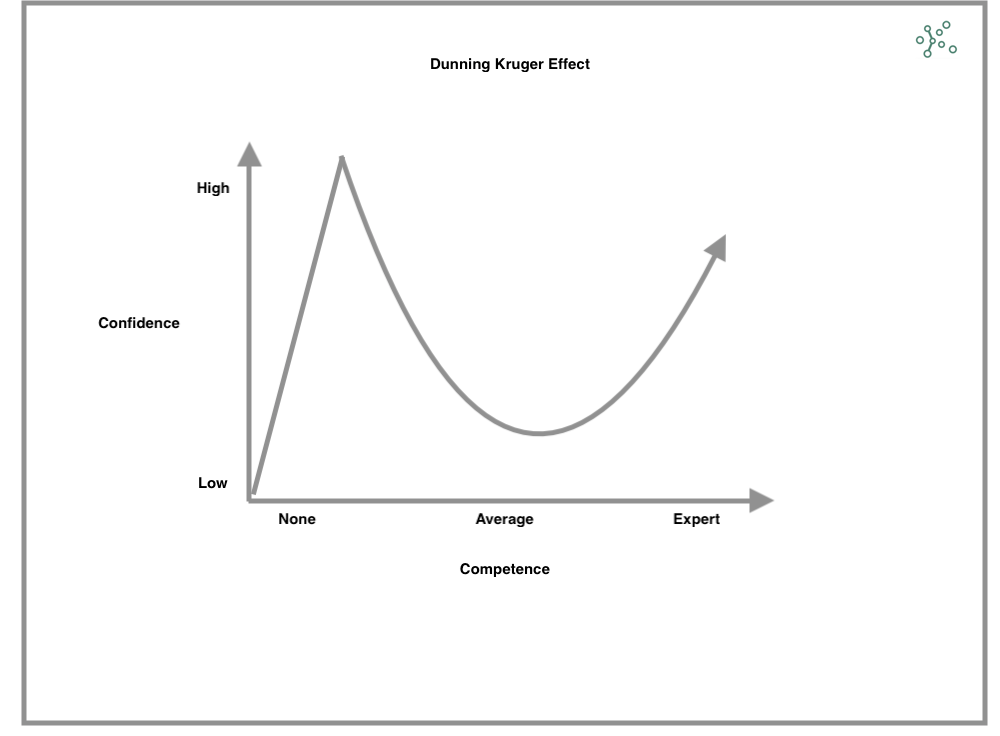 I believe that it applies to pretty much every facet of life, but especially so in the trading world, because so much is at stake and the pace is so quick.

When a new trader first learns about technical analysis, it seems easy. Just connect peaks to peaks, throughs to troughs, and draw trend lines. Follow the moving averages and the VWAP. Sell when something falls under the 200 day. Easy, right? Maybe that explains some of the appeal.

This sense then gets quickly validated as they make a few small trades, and with some beginners luck, get a few quick wins and get emboldened. “If I can make $10 in 10 minutes on a small trade, why can’t I go bigger and make $100?”

And then something goes wrong and they lose big. Chock it off, try again, and the hole gets deeper.

The truth is those obvious, basic, easy patterns are obvious to everyone, and thus heavily utilized and dangerous. Experienced traders will tell you that it’s not easy to get a good read on a chart, and even harder to be right consistently. But when something seems obvious, it’s probably not so — in other words: if it seems too good to be true, it probably is.

The most experienced traders I know will NEVER trade an obvious-looking setup. Does that Head & Shoulders pattern look PERFECT? If so, it’s probably not. The more obvious something is, the more people that recognize it and trade it, the less likely it is to work out. This truth isn’t intuitively apparent until you’re out of the Dunning Kruger danger zone, though…

How to Avoid FOMO in Trading

So what can traders do about it?

In my opinion, a few things:

That last point, to me, is really important. It’s one of the main reasons that we built TrendSpider — to help traders apply analysis to a chart after chart without deviating from their rules.

It’s harder than it sounds. You have to not only make sure that you’re following a chart analysis system religiously, but also you have to make sure you are using the same chart settings, the same zoom level, and more, in order to give yourself comparable, repeatable analysis you can trade on.

However you do it, whether using TrendSpider or just being meticulous yourself about your charts, remember this: you can become a better trader by avoiding FOMO traps and the Dunning Kruger effect. They go hand in hand. And if you are honest with yourself about that, you can recognize it in the heat of the moment and avoid making potentially costly mistakes.

I hope you enjoyed this article. Let me know what you think in the comments below!