Let’s face it, there are very few people who really know and understand the inner workings of a company better than its executives, directors, and other high-ranking employees. They’re privy to information of all kinds, both good and bad, and when they buy or sell, they generally do so for good reason.

Being mindful of when this buying or selling is taking place is a specific edge that can be added to the arsenal of any trader on the TrendSpider platform by simply enabling the ‘Insider Trading’ widget, TrendSpider’s insider trading tracker. Within the widget is a list of all the insider transactions that have occurred over the past year, and these transactions can help to shed light on how insiders view the current price of a stock and where it might be headed in the future.

To highlight the different ways that TrendSpider’s Insider Trading widget can be used, we’ll be looking at three unique insider trading examples; the tech selloff, the current run on energy stocks, and finally, where the buyers are now.

First, and most notably, we shine our light on $FB (Facebook). The amount of selling that CEO, Mark Zuckerberg, did in 2021 was simply staggering. During the period between March 1 and November 8, 2021, nary a day went by that Mr. Zuckerberg didn’t sell upwards of $25MM worth of common stock.

Many on the street commented about this selling, but how many heeded its warning? Shortly after his final sale, the name began to lose ground and has recently traded as much as -43.74% lower. Per the widget, we can also see that he has not purchased a single share of stock since his last sale. 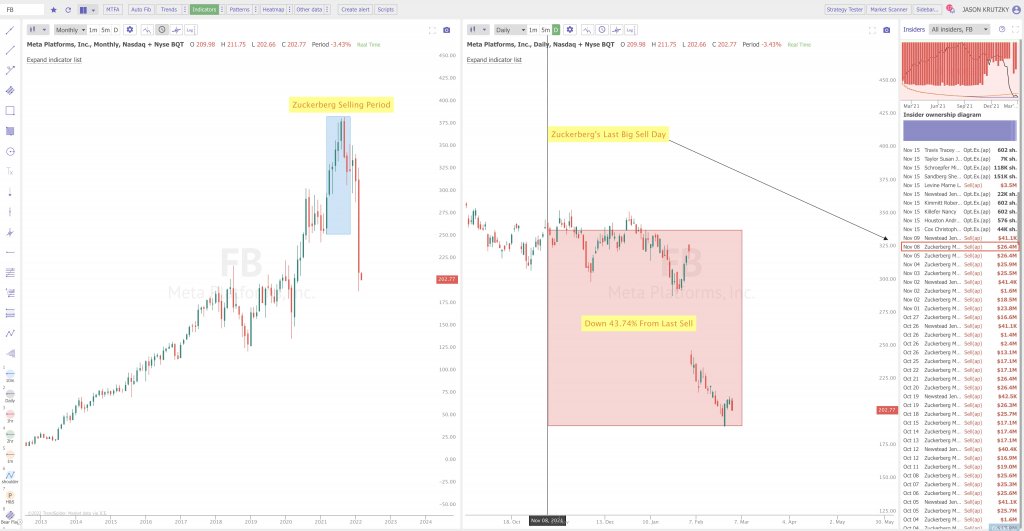 Another market darling of the past few years is $PTON (Peloton) whose stock absolutely soared during the Covid period. Naturally, some selling from its highs was expected, but what’s interesting here is that insiders were willing to sell well below the price at which they were awarded shares. Curiously, a few days after the second insider selling period ended, the name saw a huge drawdown and has not since recovered.

We all know the news now; They’ve cut staff and production and there are rumors that they are looking for suitors to take over the fledgling business, but it sure feels like employees might have seen this coming. 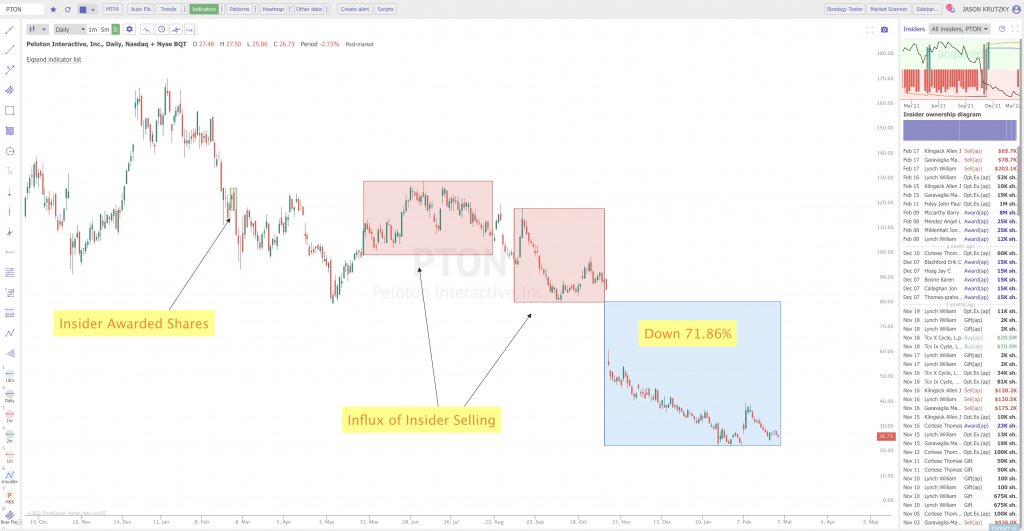 Finally, we have $PYPL (Paypal). Pictured below, it can be seen clearly that CEO, Dan Schulman, was selling the entire consolidation period that came after all-time highs. From the time of his final sale in late December of last year, the stock traded down -35% before he was a buyer again. 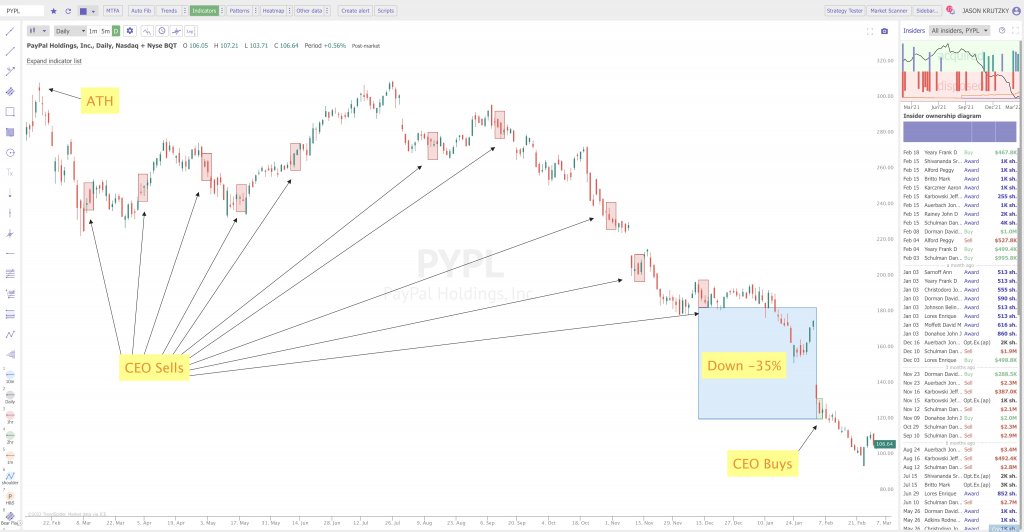 Based on our findings, it would be hard to deny that tech insiders saw this downside coming and took appropriate measures to protect themselves. The amount of selling was immense, but what’s more interesting is the lack of buying that’s occurring today.

The Run on Energy

We’ve shown how TrendSpider’s Insider Trading tool gives us an insight into the past, so let’s now look at the present. In today’s market, few names are stronger than those in the energy basket, so let’s dig into some of the biggest oil and gas names in the world and see what insiders at those companies are doing now.

Pictured below is the chart of $COP (Conoco Philips). Clearly, insiders have very recently been selling into this strength.

The same can be said for $CVX (Chevron), which shows insiders have been unloading shares for the past month. 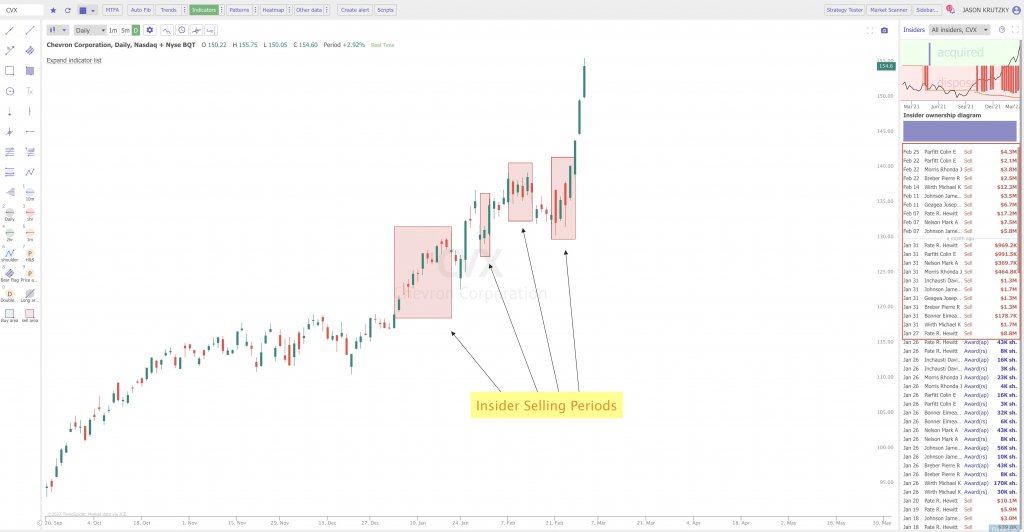 Finally, we can see selling in $MRO (Marathon Oil). Insiders at this company are unloading huge lots at or near all-time highs. 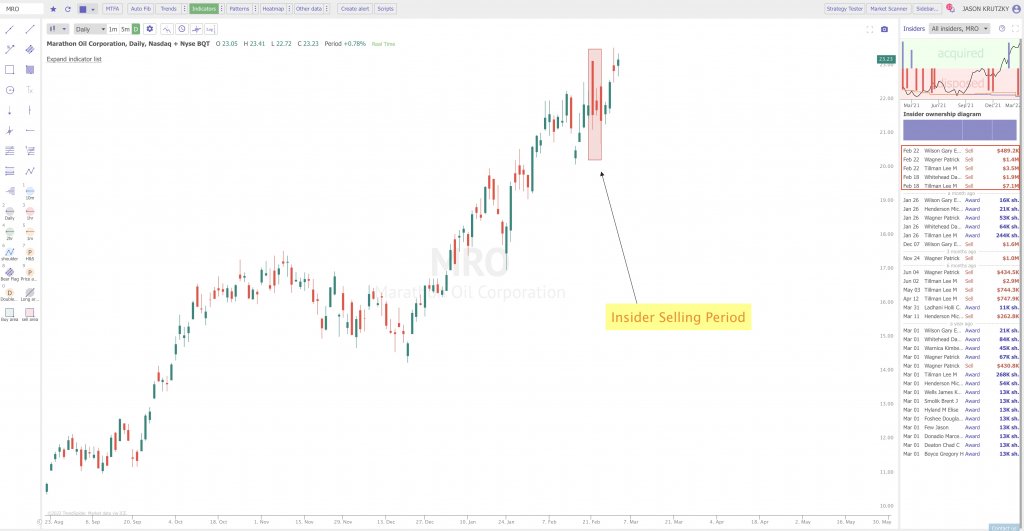 What does the current insider selling in the energy sector suggest? Could it be an early signal, much like the one that we saw from tech leaders late last year and early this year?

Where Are the Buyers Now?

It’s said that insiders sell for many reasons but only buy for one; because they think the stock is going to go up. So, let’s look at a few names that are bucking the trend and seeing heavy insider buying.

First, we have $ASAN (Asana). CEO Dustin Moskovitz has been a rabid buyer of his company for many months. Marked below are all of the periods in which he has purchased shares. Note the size of the buys, as well as the fact that he seems indifferent to the price of the stock when he’s buying. 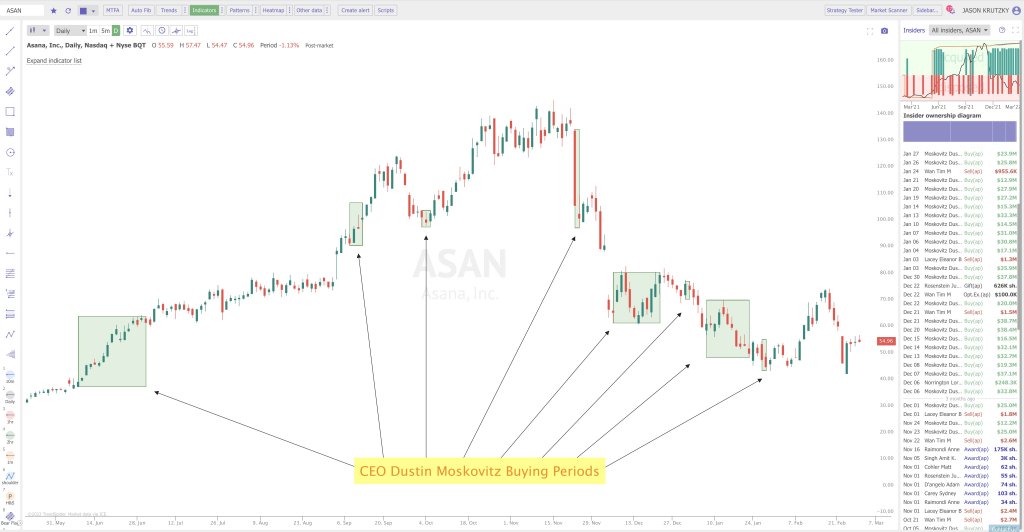 Next up is $MTTR (Matterport). CEO RJ Pittman clearly sees some value in his company here, as it’s down a whopping 79% in less than four months! 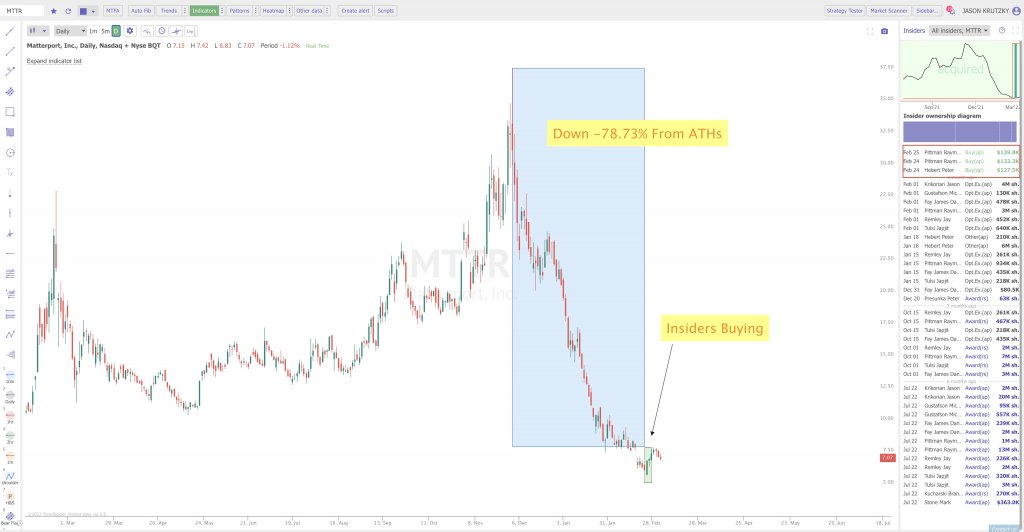 Finally, we have little known name $NSIT (Insight Enterprises, Inc.), which saw some of the biggest insider flows all week. If this name wasn’t on your radar before, maybe it should be now! 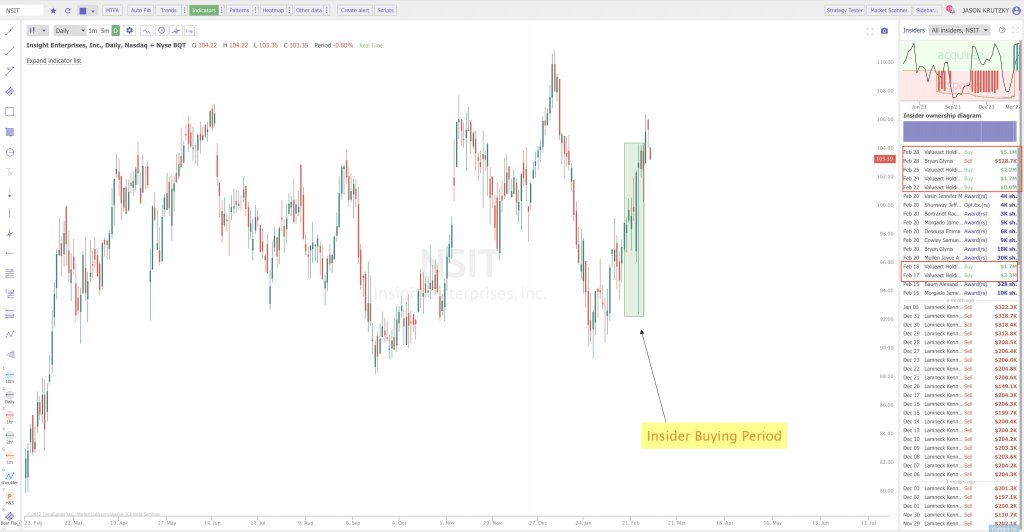 As you can see, knowing what the insiders are doing at any given time can give you quite an edge in the markets. If you’d like to add this tool to your TrendSpider charts, simply click on the ‘Sidebar’ button, select ‘Add New Widget’, and then choose the ‘Insider Trading’ option. Happy Trading!