Skip to Main Content
BlogPrepare for the Trading WeekMarket Update Into 8/13: Broad Market Analysis Into the Second Half of August
This year has been nothing short of volatile with the broad markets swinging massively both up and down due to a number of factors. One thing is for certain though, this is likely to continue into the rest of the year.  Even though fundamentals are general drivers of the market, these events line up with technical indicators almost perfectly a lot of the time. We will take a look at both the longer and shorter-term technical view of some of the broad market ETFs as well as identify fundamental drivers that may have an impact on price levels for the rest of the summer and into the second half of the year.

Variables Into the Rest of the Year

One of the things that many participants in the market may not know is that interest rates affect the stock market generally in a negative way. The reason for this is that as interest rates move up, investors pull their money out of equities (higher risk) and move it to fixed income (bonds, CDs, etc.) as it is generally the safer way to go.

Since the 2008-2009 crash, interest rates have stayed extremely low in order to help boost the economy (lower interest rates means it costs less to borrow money which makes it easier to go out and create economic activity. i.e Buying a house, starting a business, buying materials to grow your business, etc.). Many economists and experts would argue these rates stayed too low for too long. As the economy grows, prices naturally start to increase and inflation comes back into the picture. This means the economy has the chance of overheating as expansion occurs. In order to mitigate the risk of the economy overheating, the federal reserve will increase the rate to borrow money which causes the economic expansion to slow as fewer people seek new loans.

The federal reserve has been one to keep its word this year in regards to interest rate hikes with another potential hike in September.

As mentioned previously, technical and fundamental events generally coincide pretty closely. Below is a chart that shows the 10-Year Treasury Note compared to the S&P 500’s performance since the 1990s.

Figure 1: Each time interest rates on the 10-Year Treasury Note hit resistance, there was a strong pullback in the S&P 500. The 10-Year just broke out through 30-year resistance, is another pullback on the way? 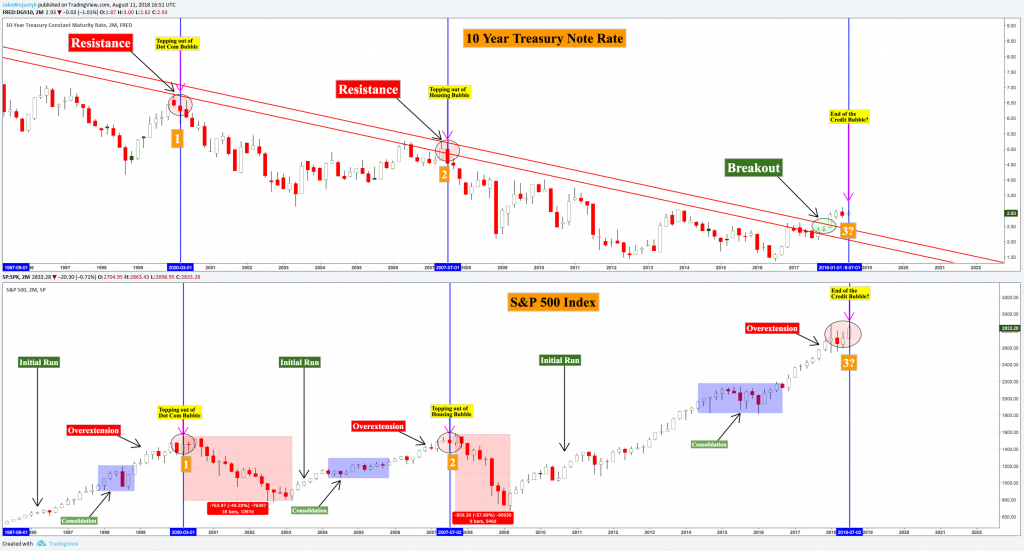 Figure 2: A chart showing the 10-Year rate breaking out of the 30-year downtrend. 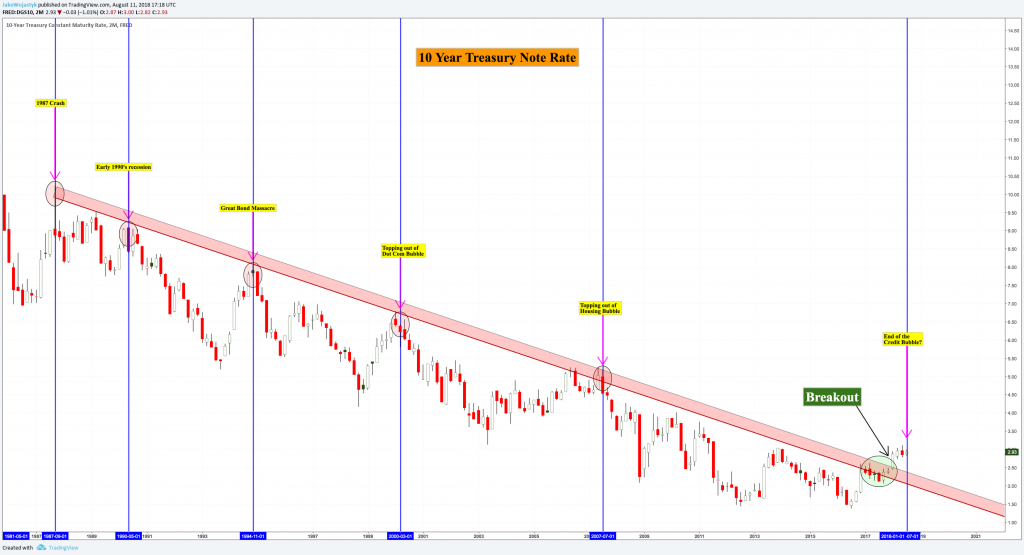 One of the main factors adding to market volatility this year is the constant fear investors have that another tweet will be released in regards to another tariff threat. If these continue to be a normal happening, expect volatility to continue to rock the broad markets.

However, there is one important variable in this equation and that is the “Efficient Market Hypothesis” or EMH. The EMH is a theory that essentially says information that is publicly available within the financial markets is reflected in the current price levels. This theory covers the fact the market status quo changes once information is released and that information should be “baked in” to the price afterward.

One thing about the stock market is that expectations have a lot to do with the current price levels and sometimes investors can “forget” information has already been released to the public. An example of this is the difference between the market reaction to a new tweet by the President regarding brand new tariffs compared to a simple press release that tariffs listed tariffs on $200 billion worth of goods.  Almost every time the market has pulled back due to a tariff going into effect or a PR about tariffs that have already been discussed, it has almost bounced back immediately. Why? This information was already priced into the market.

Figure 3: As the cartoon suggests, each side has the ability to turn this trade war into a more serious economic event.

Figure 4: This chart illustrates how the market bounced right back and then continued up after the announcement of the list of goods under the $200 billion tariff plan. 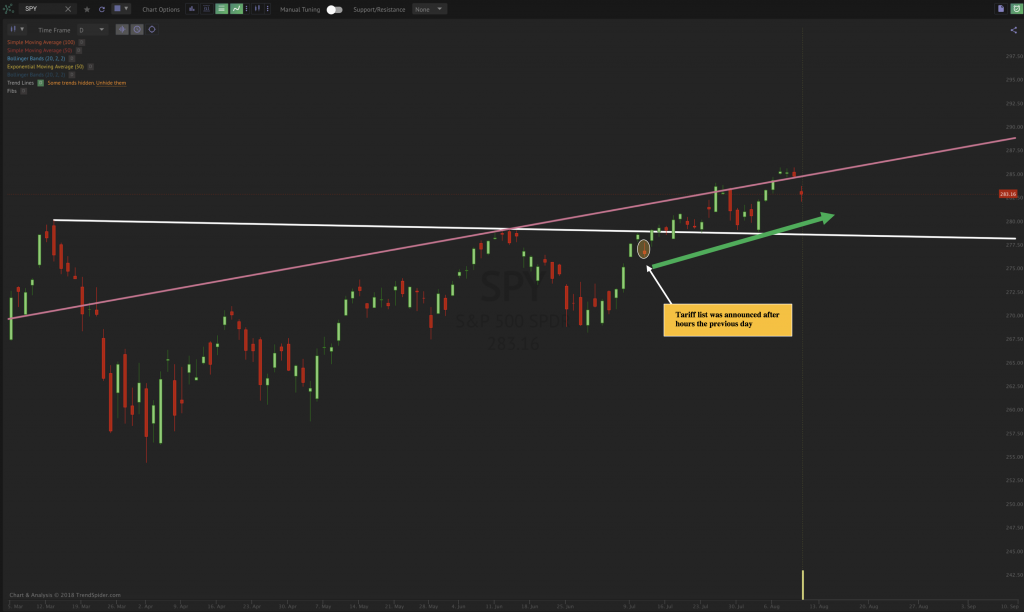 As the mid-term elections near in November, this adds another level of volatility as there are a lot of unknowns that come along with this event. In general, the market doesn’t do well when there are any “unknowns”, so this should be considered something to keep an eye on. If these elections show the sentiment of the current political landscape has changed at all, that may create a new change in the current status quo, bringing volatility along. 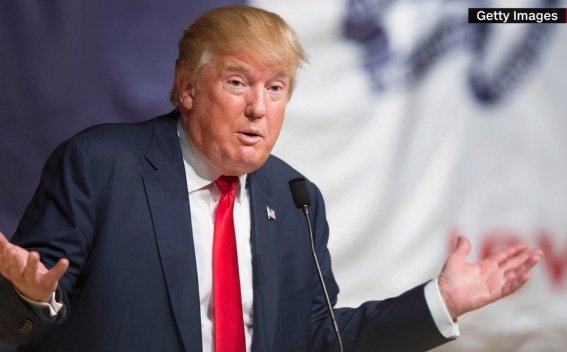 Overall, the $SPY has been moving up all year even after some large volatile drops. The dip seems to have always been bought up rather quickly as price marches towards possible “All-Time Highs” once again. 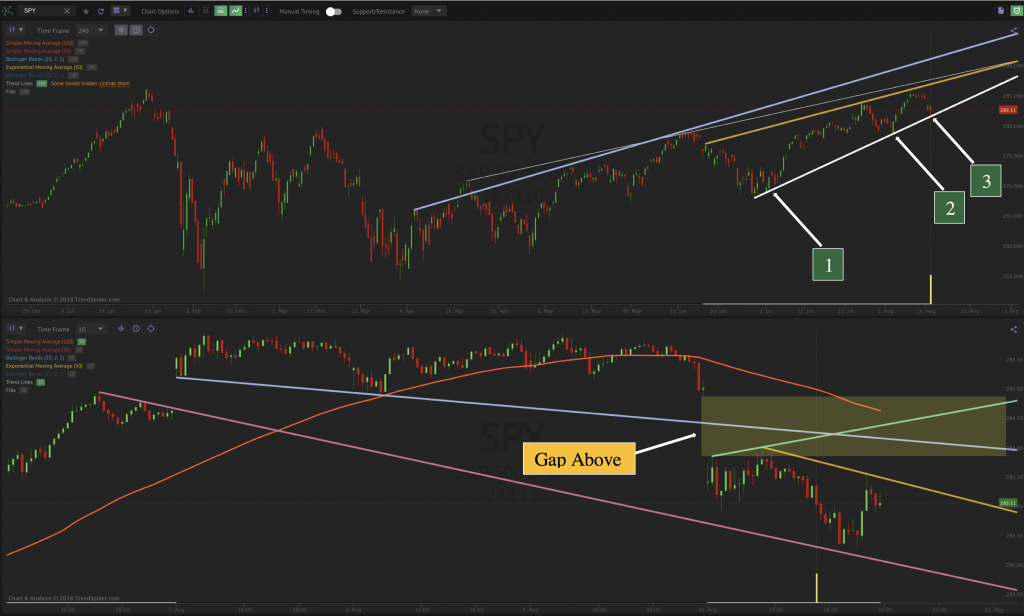 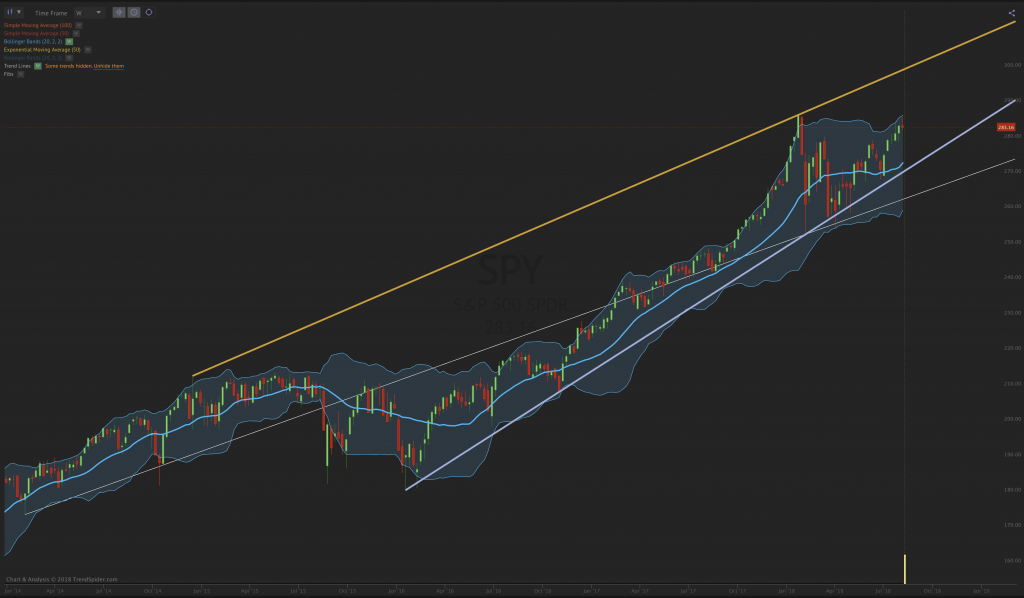 The $QQQ is also trading in a pretty defined ascending wedge on the 240-minute candle with the price dropping with the rest of the broad markets this week. Tech has been a hard one to crack with earnings season being all over the place for Q2. 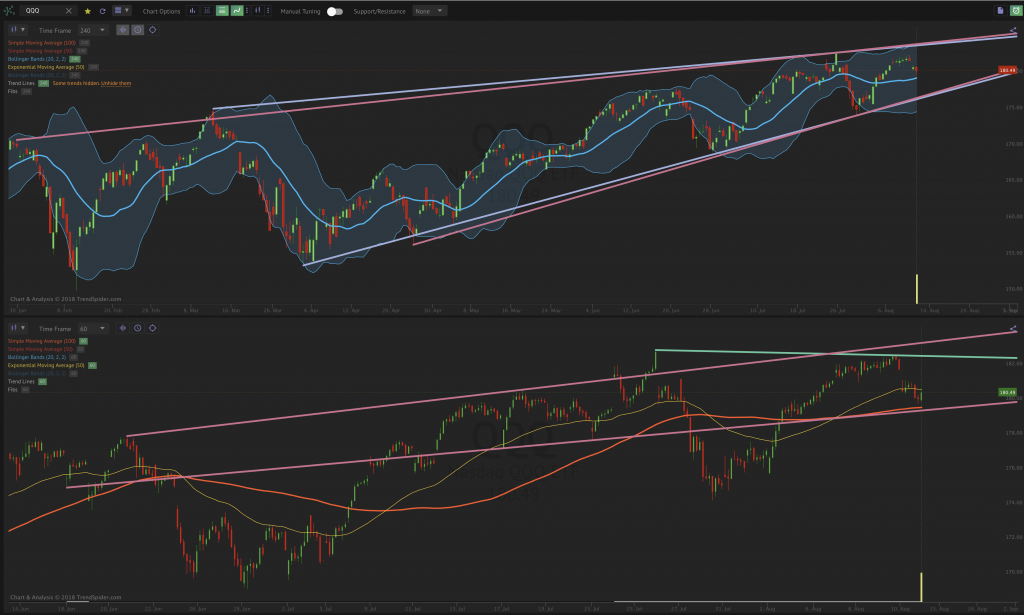 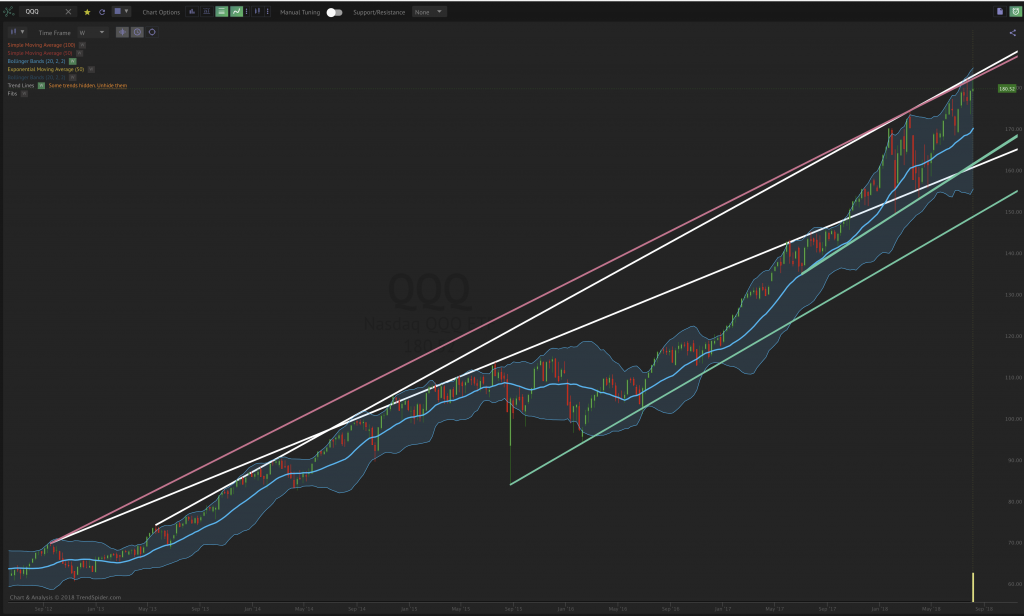 As $DIA (ETF for the Dow Jones) also covers most of the broad markets, the charts look pretty similar to the $SPY and $QQQ with a few differences with one of them being $DIA not having as steep as an uptrend as the other two. 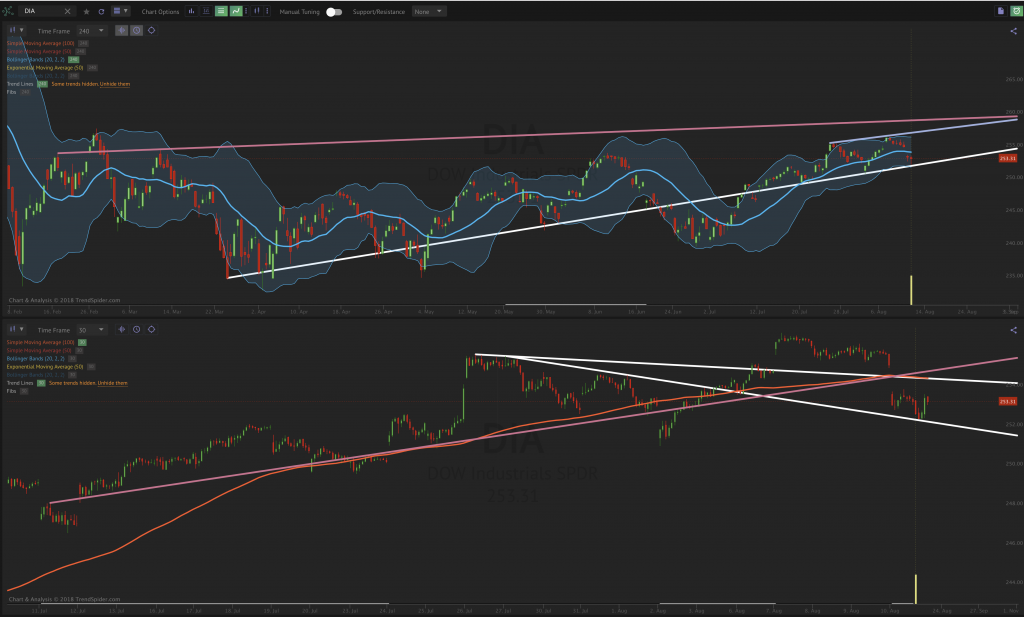 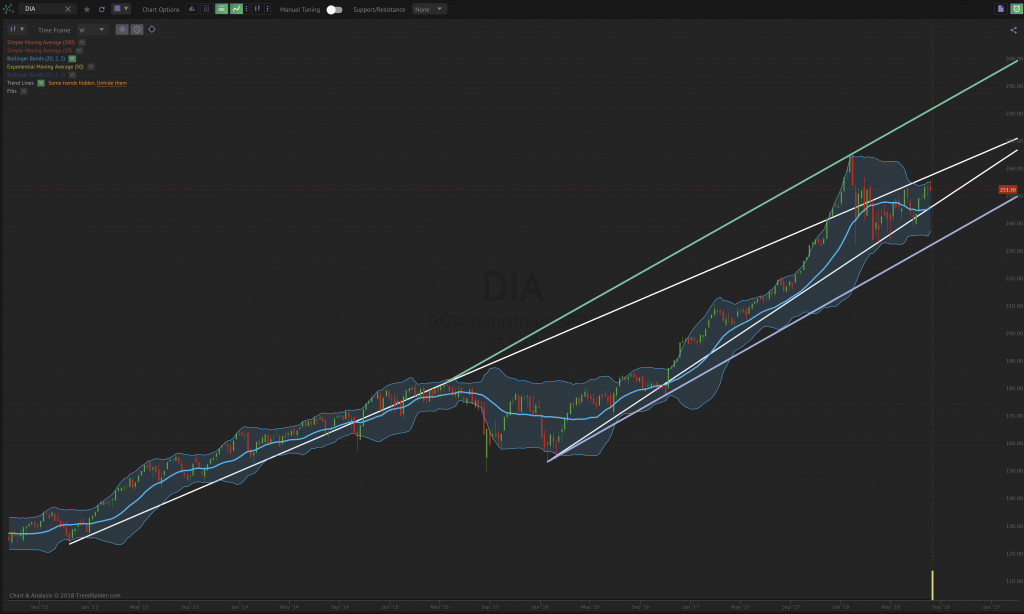