Hello Everyone, and welcome to another Software Update from the engineering team at TrendSpider. In this update, we are releasing four new indicators! 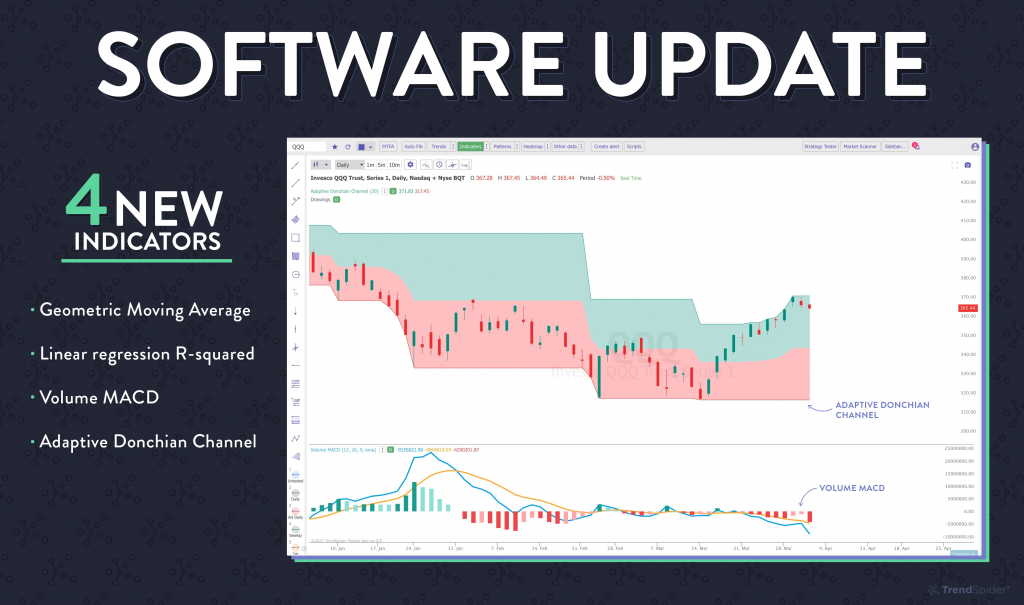 In this update, we are introducing several new indicators, including a few that are experimental in nature. The details of each new indicator are listed below.

The Volume MACD indicator is almost identical to the traditional MACD, except instead of measuring changes in price, it measures changes in volume over time. This indicator consists of three aspects: the MACD line itself, the Signal line and the Histogram. It can be used in the same way as the traditional MACD indicator, to identify overbought and oversold zones, to measure momentum and identify divergences.

Just like the traditional MACD, the Volume MACD indicator has three user-defined inputs that can be adjusted: Fast MA length, Slow MA length, and Signal length. The default values are 12, 26, and 9.

The Linear Regression R-Squared indicator is a statistical regression model that measures the variance between a dependent variable and an independent variable. In trading, this is calculated using the relationship between price and time. It abstracts the movement and the linear regression of the movement. When the price and the R-squared value move closely together, it suggests a stronger trend. This indicator can be used similarly to a momentum oscillator, helping to identify divergences as well as trend strength.

The Linear Regression R-Squared indicator only has one input from the user: Length. The default setting for this variable is 14.

The Adaptive Donchian Channel is a new take on an old classic. Donchian Channels are a type of price action indicator that measure the range of price. The top Donchian line is always above the price action while the bottom line is always below it. There is no way for these lines to be within the price action, they are always on the edges. However, where a traditional Donchian Channel indicator adjusts based on a time factor alone (e.g. after X candles have passed after price has changed, both the upper and lower bands will reset to the latest price level) the Adaptive variant of this indicator only adjusts the lower level when the upper level is adjusted by price, and vice versa. This creates a new way to measure ranges where the range is not reset until one part of it is “pushed” to reset by price.

The Adaptive Donchian Channel indicator only has one user-controlled variable input: Length. The default setting is 20. 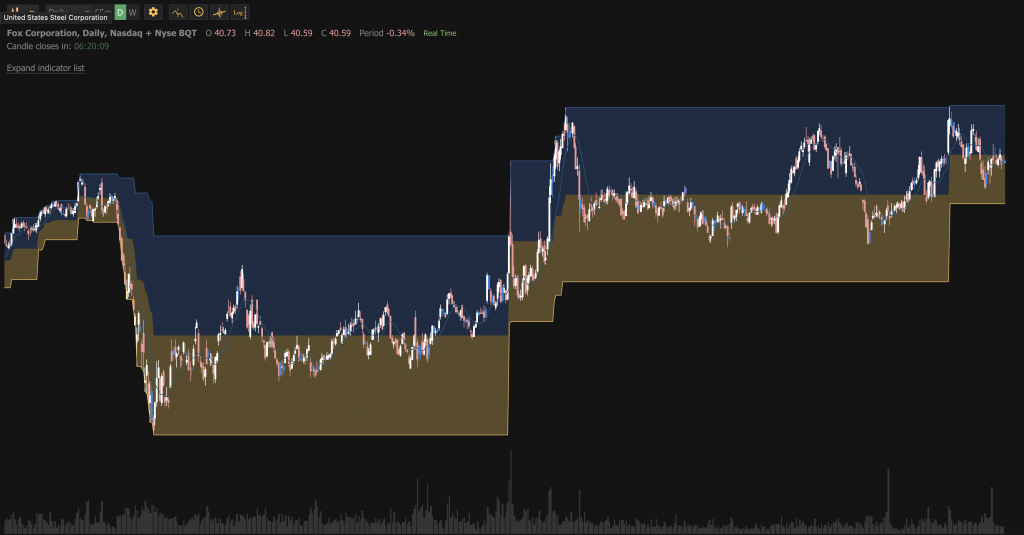 The Geometric Moving Average is similar to a traditional moving average but instead of calculating a rolling average, it calculates a geometric mean level. In mathematics, this means instead of adding the values together and averaging them, the GMA multiplies the time series and then takes the Nth root product of the last result. This provides a very responsive moving average that adapts to price dynamically and follows price more closely. It may be used in the same way as any other moving average.

The GMA only has one input parameter that can be controlled by the user: Length. The default value is 10.

We hope you enjoy utilizing these new indicators and look forward to adding even more to the platform soon!