Raindrop Charts are a new kind of financial chart designed to let you to see what’s happening in the market from a unique perspective. Raindrops are built from the same market data as Japanese candlesticks, but incorporate volume into the final visualization, showing you how price and volume play out over time.

The left side of a Raindrop represents the first half of the period and the right side represents the second half of the period. Each half is essentially a small Volume at Price, or Volume Profile, chart (that has been rotated 90 degrees). This lets you see how market sentiment changes by comparing the first half of each period’s histogram to second half’s histogram. You can read more about Raindrops and how they are constructed in the official white paper. 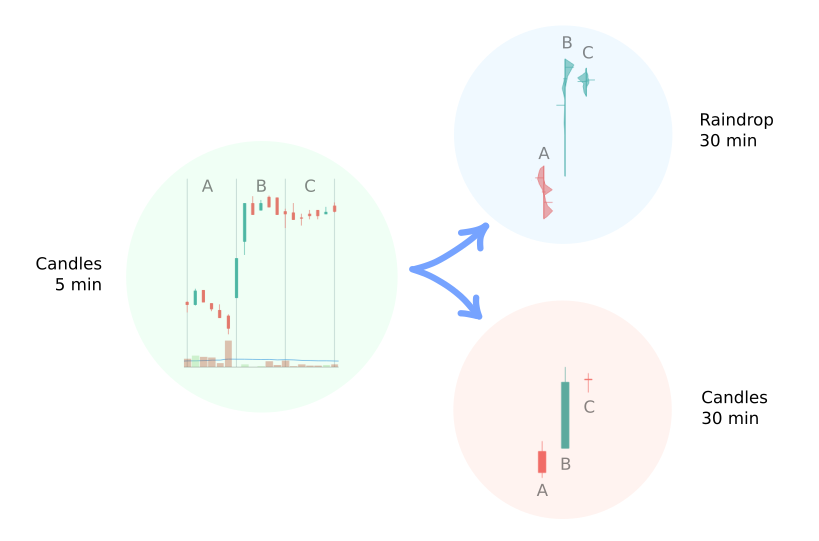 The best way to see the benefits of Raindrop charts over conventional Japanese candlestick charts is to look at an example. In the image above, the 30-minute center Raindrop (blue circle, marked B – long green one in the middle) tells a much more comprehensive story about volume and price action than the corresponding 30-minute candlestick (red circle, marked B).

Let’s dig into that for a moment:

Now, to dive deeper, compare this Raindrop visualization to the 5-minute Candles on the left (which show a more granular story), and you will see that the 30-minute Raindrops provide a high degree of granularity, even at higher time frames. Now let’s take a bigger chart and demonstrate the real power of Raindrop charts.

Comparison: Raindrops vs. Candles on ADSK 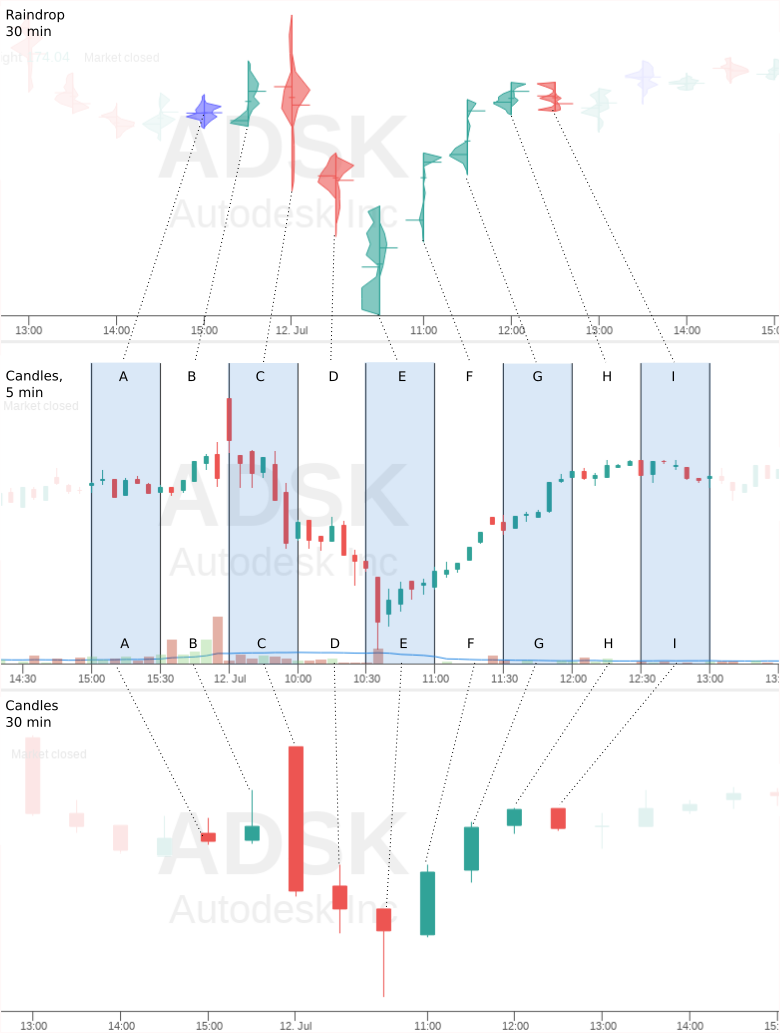 The key difference between Raindrops and Candles is that Candles are constructed using traditional Open and Close prices, which I perceive as random price breaks: set by the passage of time, and containing no unique information about the price other than its timestamp. Conversely, Raindrops use Left and Right Volume-weighted Average prices (VWAPs) instead, which contain a deeper level of information about movements in more than just price — it shows the sentiment of a market.

In the above illustration, you can see a clear difference at candle E, but let’s walk through them one by one.

Many of the traditional candlesticks form patterns. In order to get the most out of candlestick charts, it is helpful to have an understanding of these common candlestick patterns.

With the Raindrops, the charts are naturally intuitive. You need nothing but common sense to see market flowing from one point of balance to another. It is clearly visualized with the volume histograms.

Raindrops tell simple yet informative stories. You don’t need to memorize patterns or complex rules in order to understand them. Raindrops give you a much deeper look into the market’s sentiment flow, while still maintaining pretty low amounts of noise.