Mr. John Bollinger is a stock trader and analyst who needs little introduction; as well as the very popular Bollinger Bands® which he created. John created the Bollinger Bands® in the 1980s to answer a need for adaptive trading bands to better chart market volatility, rather than the static ones which were being used at the time; and the rest is well-respected history in the world of charting and technical analysis. Since their inception, dozens of profitable trading strategies have been built around Bollinger Bands®, and today we will look at a case study that incorporates the “bands” with three other popular TrendSpider trading indicators on the daily chart for Moderna ($MRNA). 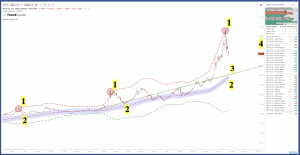 This is a daily chart of Moderna since May of 2020, showing the recent huge move to the upside over the last year. This chart focuses on a few different technical and non-technical tools to get the full picture of what is going on in this chart. Moderna has started to have a sharp pullback after being above the weekly Bollinger Band with a three standard deviation upper band to filter out some of the noise that happens when only using a default two standard deviation band.

One their own, Bollinger Bands® are a very powerful charting tool that has helped thousands of traders over the years attain financial independence trading the markets with a better understanding of volatility. When Bollinger Bands® are used in conjunction with other powerful software charting tools and market information, the synergy is immeasurable. We hope that this case study help to show why trading Bollinger Band® on TrendSpider with its suite of proprietary tools and charting indicators changes the game. Why don’t you give our RSI with Volatility Bands Indicator a try for 7-days free and see what it along with dozens of other automated charting tools can do for you.