Trading price action is a pretty straightforward idea of understanding support and resistance levels. However, understanding momentum and the direction of price at these levels is probably one of the most difficult concepts for many new traders to grasp. Being able to spot momentum increasing or waning at these levels makes the difference between success and failure when entering trades. There are numerous momentum indicators on the charts of many today, but we would like to spotlight one which is growing in popularity; the BB/KC Squeeze Indicator, also known as the TTM Squeeze Indicator.

What is the TTM Squeeze Indicator?

The TTM Squeeze Indicator also known as the BB/KC Squeeze Indicator in TrendSpider is a volatility and momentum indicator that visualizes the relationship between the Bollinger Bands® and Keltner Channels which helps to identify when an asset is consolidating (squeezing) and signals when prices are poised to break out/down. By being able to recognize when periods of volatility are about to occur, the TTM Squeeze can be a game-changing tool that might be able to offer improved profitability with a good understanding of how it works.

The TTM Squeeze (BB/KC Squeeze) is comprised of 2 main components:

1.The Momentum Oscillator: This is the vertical histogram which indicates the direction of momentum. The “blue vertical” lines are positive momentum and the “orange vertical” lines negative; in relationship their positions above or below the horizontal “zero line”

2.The Zero Line: this horizontal line is where the squeeze is visualized by a series of green and red dots. Green dots are a condition of “no squeeze” and the Red dots are when the price is squeezing. 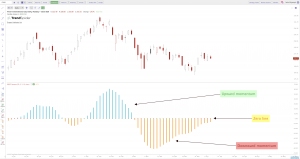 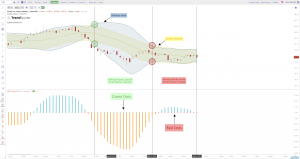 As seen, these squeeze conditions represents the consolidation of price by the pinching of the Bollinger Bands® within a tight range of the Keltner Channels which corresponds to a series of red dots “firing” along the zero line on the TTM. Increase in momentum is represented by the lengthening of the bars on the momentum histogram on the TTM and the expanding of the Bollinger Bands®; with a release of the squeeze seeing the red dots turning green. The TTM Squeeze Indicator helps to take a lot of the guesswork out of the momentum equation with a simplified representation of what’s happening when the Bollinger Bands® and Keltner Channels enter a consolidation pinch.

Using the Market Scanner to Trade the TTM Squeeze Indicator:

So now that a clear overview of the mechanics of the BB/KC Squeeze Indicator or TTM Squeeze Indicator has been laid out, let’s take a look at how to put it to use while trading using TrendSpider’s MArket Scanner to find trades in a squeeze.

Using TrendSpider’s Market Scanner, you can search for any asset/chart that is in a “squeeze condition”. Once an asset is chosen from the list provided by the Market Scanner, focus should be on the “Zero Line” on the chart. If you recall, the Zero Line is where the green and red dots fire, determining if the asset is in a squeeze. If so, then a series of red dots should be firing at that time. The red dots by themselves are not a signal for entering a trade, but should be used in conjunction with the vertical momentum bars. As the momentum bars near the “zero line”, this is the signal (condition) that we should be looking for; which indicates that momentum is shifting into positive or negative territory. Once these conditions are met, an entry for trade can be considered.

There are many opinions about when to enter the trade at this point once a momentum shift has been confirmed; some do so on the first bar, others after one or 2 have been confirmed. This is something that one will have to determine on their own and get better at over time, but a successful strategy can be developed by using TrendSpider to back-test the accuracy of various entry points and time frames; as it may differ to some extent depending on the asset. 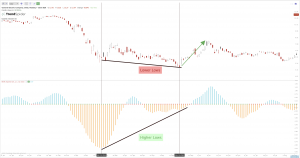 So when do we take the trade? As with any trading strategy, proper risk management should be the first thing considered. However, there are two camps when it comes to trading TTM (BB/KC) Squeeze Divergences. One uses the traditional form of divergences by taking the slopes from both price and the momentum indicator, but there are those who believe that only the slopes from the histogram should be considered when trading divergences on the TTM (BB/KC).

Like any other technical indicator, the TTM is no magic bullet and would best be used with other indicators as a confirmation of price direction and momentum. Peter Hegedus of the The Traders Path trading education service, recommends using it alongside the 3, 8, and the 20 EMA’s. Price always seeks to return to the EMA’s over time and with greater probability as the price deviation is farther away from the EMA lines. So, if you imagine a rubber band stretched to its extreme, the tension forces it to return to its original point once it is released; which is also expected of the price which has moved away from the EMA’s after a release from the red dot squeeze is indicated by turning green and histograms slopes. Peter is especially fond of the SMA 20, as it also represents the line that runs center within the Bollinger Bands®. Therefore, as the price moves outside of the Bollinger Bands® it can be expected that it will return to the SMA 20, which might make for a good exit strategy. 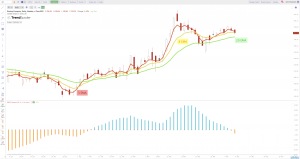 When you hear of an account being “blown out”, it was most likely due to misinterpreting momentum and the direction of price. However many solutions to this problem may be available, so many traders risk their accounts by depending on traditional volume indicators that are just an aggregate of price to gauge momentum to their detriment. Although there are many equally as useful indicators out there, the TTM Squeeze Indicator is one that makes spotting momentum changes and incoming volatility much easier via a clean visualization on the chart.