Do you have a favorite momentum oscillator? A very tough question indeed, but there is one that has been the popular choice of most day and swing traders since it was first developed by J. Welles Wilder Jr in 1978; which is the Relative Strength Indicator (RSI). The Relative Strength Indicator is one of the more straightforward indicators to use, but trading it might require a little more understanding beyond the oversold / overbought signals printing on the charts; which we will look at in this blog post.

What is the RSI (Relative Strength Indicator)?

The Relative Strength Indicator is a momentum oscillator that measures the speed and direction of price action. The RSI oscillates between a range of 0~100; with any price below 30 indicating an “oversold” condition and price above 70 considered as “overbought”. Simply, if an asset is trading over its “true” price, it is considered to be overbought; and below its “true” price is oversold. Intuitively, seeming more like “overpriced and underpriced” conditions. This is similar to a company’s market capitalization measured by 52 week highs/lows, but the RSI follows the stocks price fluctuation over shorter time frames/periods.

The RSI is comprised of three simple components: 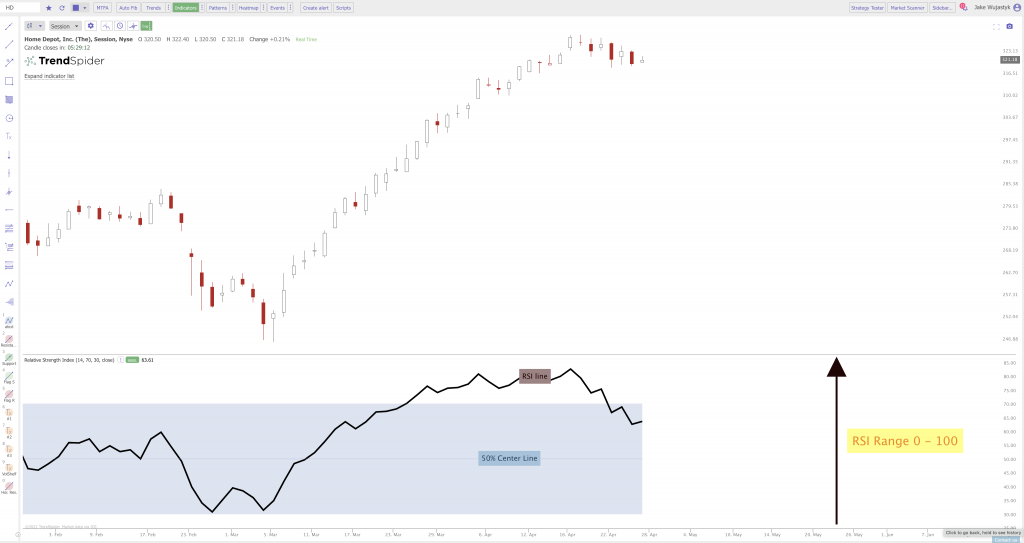 The RSI line represents an average of the number of days the price was up divided by the number of days down over a 14 day period. The inverse is calculated for down days. The 14-day period is reference to the typical RSI setting and can be adjusted for greater or less sensitivity depending on the time frame you are trading. Lengthening the period length is known as “smoothing” and adds stability to the RSI price line. Therefore, some traders prefer to set a longer period when trading lower time frames to reduce volatile movements in the RSI to achieve a “smoother” oscillation line.

The most widely traded strategy for stocks and other assets on the RSI Indicator is divergence. RSI Divergence is when a stock’s price contradicts the RSI indicator hinting at a potential price trend reversal. Being able to spot trend reversals before the move happens is what makes the Relative Strength Indicator a valuable addition to any trader’s arsenal.

Bullish (Positive) Divergence (as seen below) is when the RSI prints higher lows from an oversold condition above the 30 percent range and price follows on the chart with lower lows. This is an indication that selling momentum is slowing and a potential long entry. 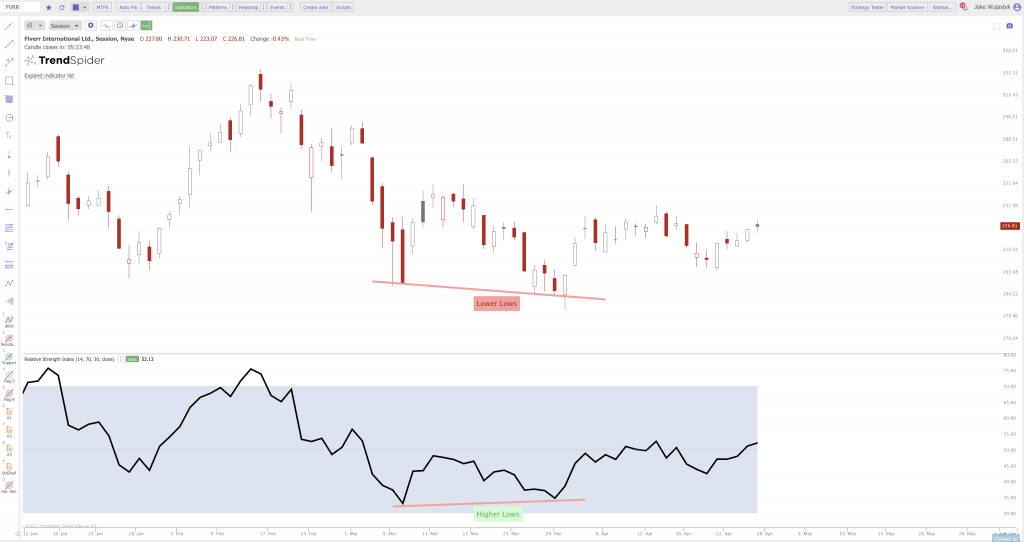 Bearish (Negative) Divergence (as seen below) is when RSI prints a lower high from the overbought condition below the 70 percent line; with price peaking out its higher highs. This is an indication that buying is slowing and presents a potential short entry. 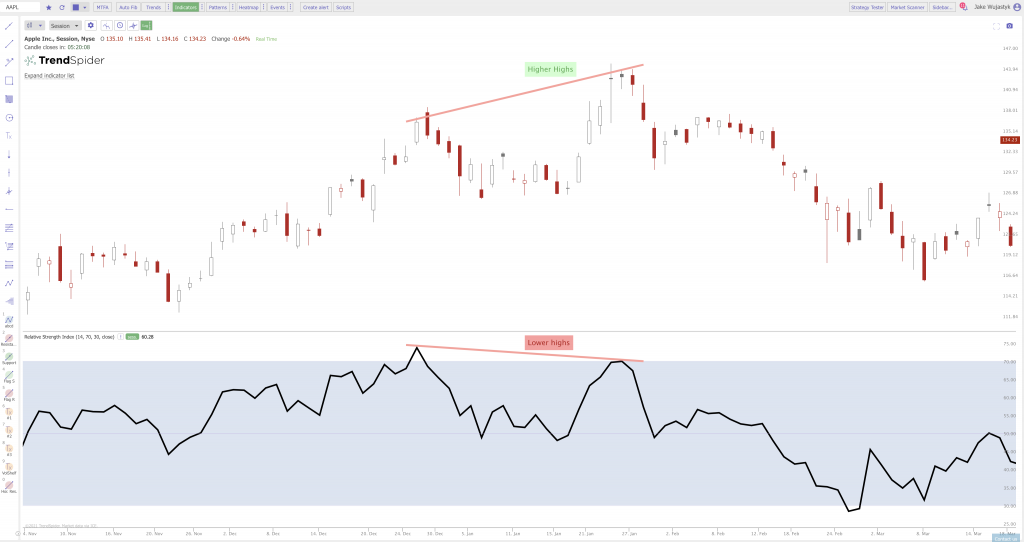 RSI Swing Rejections ignore price action and look only at the RSI’s oscillation for entities and exits on a position, which is a hard pill for some traders to swallow. This strategy mirrors support and resistance rejections, but using the RSI oversold (30%) and overbought (70%) areas. In these conditions, potential trade entries are triggered.

A Bullish Swing Rejection (as seen below) is when the RSI line gains the 30% level from an oversold condition, pulls back to test the 30% level as support, and bounces off the 30% level to make a higher low above the previous high made after breaking out from the range. In these conditions, a potential long (buy) trade is triggered. 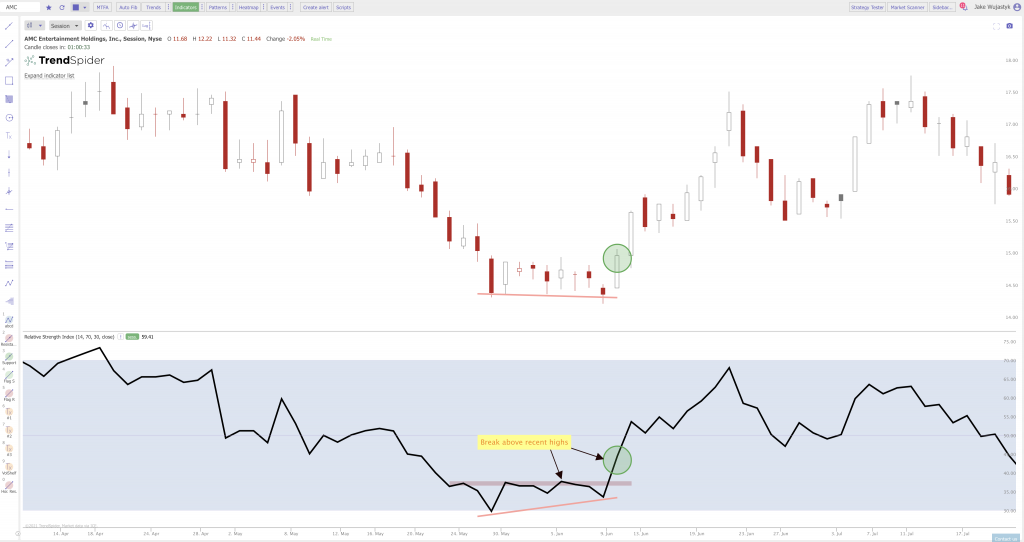 A Bearish Swing Rejection (as seen below) is when the RSI line breaks down below the 70%(overbought) level, creating a new swing low. Price attempts to regain the 70% level again, but rejects at the swing low created from the breakdown; resulting in the continuation of the downward trend. On these conditions, a potential short (sell) trade is triggered. 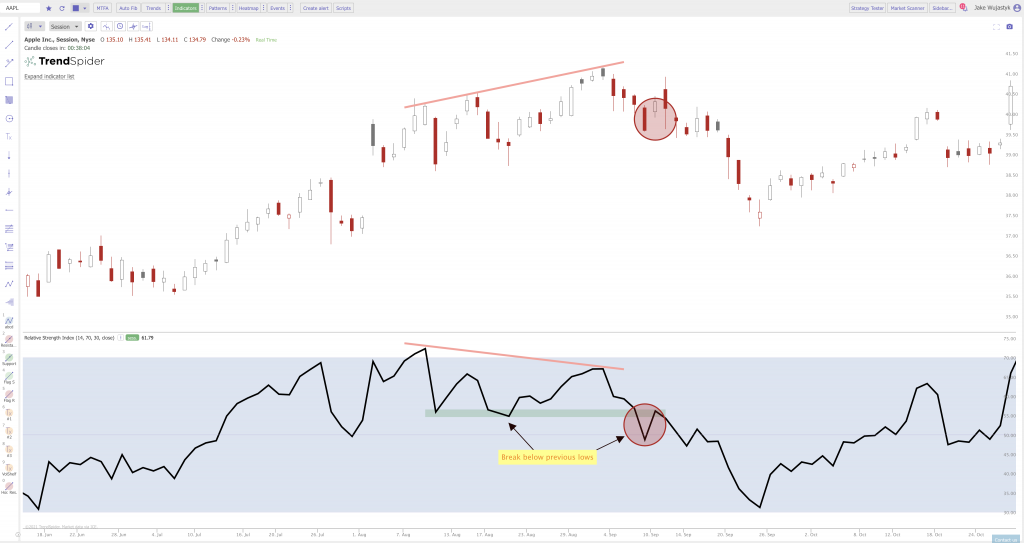 With any of these stock trading strategies, it is best to trade them according to the current macro trend; as the RSI (like many others) is a lagging indicator. Therefore, we don’t recommend entering a trade on a bearish swing rejection during an up-trending market; and vice a versa. Remember, “the trend is ALWAYS your friend”.

In addition, an asset can remain in the oversold / overbought territory for some time; printing false positives / negative which can wear an account down. So we definitely recommend using the Relative Strength Indicator with other indicators and candlestick chart patterns to confirm the trade before pulling the trigger.

TrendSpider offers some very unique features to help traders become more profitable and overcome some of the trading pitfalls mentioned. TrendSpider’s “Multi-Factor Alerts” is one feature that will allow you to set alerts to fire when preset conditions are met across several indicators. For example, you can set an alert to notify you when the RSI enters oversold conditions with the MACD nearing a bullish cross. Being able to set such parameters across several indicators is a game-changing feature that makes all the difference. Try out TrendSpider for 7 days free and enjoy these benefits trading the RSI with multifactor alerts and so many other great features. Enjoy the video on RSI (Relative Strength Index) Indicator below. 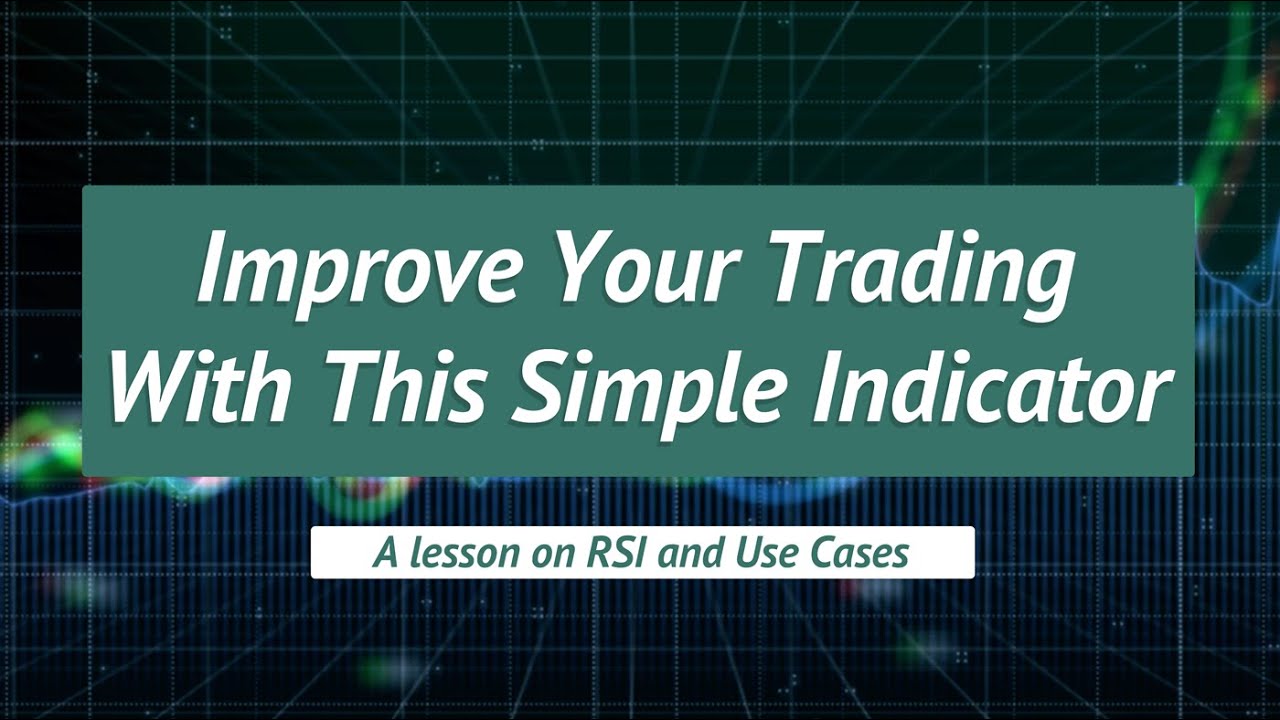