Most traders are familiar with doji candlestick patterns, which indicate that there’s a lot of indecision in the market. While indecision doesn’t always lead to a reversal, it does suggest that the previous trend is likely losing steam. This can make doji patterns helpful for predicting reversals when combined with other forms of technical analysis.

Let’s take a look at two popular doji patterns, the abandoned baby and the evening star, as well as how to effectively use them to predict reversals.

The abandoned baby is a bearish doji pattern that predicts a reversal. After an uptrend, the candle appears with a narrow trading range and little price movement, suggesting that there’s a lot of indecision in the market. The idea behind the pattern is that the decrease in momentum following a bullish uptrend could lead a bearish reversal.

The pattern can be identified in three steps:

According to Bulkowski’s Pattern Site, the abandoned baby is a very rare chart pattern. While it’s fairly accurate at predicting a reversal, the price movements following the reversal are mediocre at best. The pattern fails to reach its bearish price target 43% of the time, which means that it’s only slightly more accurate than random.

The evening star is simply a less strict version of the abandoned baby. Whereas the abandoned baby’s shadows must be clear of the preceding and proceeding shadows, the evening star only requires that the body is higher than the surrounding bodies. This means that the pattern appears much more frequently and may be more useful on a day-to-day basis.

The pattern can be identified in three steps:

According to Bulkowski’s Pattern Site, the evening star is a fairly reliable predictor of a bearish reversal with 71% accuracy. The downside is that the move following the reversal is also mediocre with a 57% chance of hitting the price target. This means that the candlestick pattern shouldn’t be the only source for a trading signal.

How to Trade Them

Abandoned baby and evening star candlestick patterns are fairly accurate at predicting a reversal, but the reversals tend to be short-lived in nature. Evening stars tend to be more helpful since they occur more frequently and better predict a reversal compared to abandoned baby patterns. But, both should be complemented with other forms of technical analysis.

For example, you might use evening star patterns to create a watchlist of potential bearish reversals. You can then analyze each chart for additional signs of a reversal, such as an oversold relative strength index (RSI) or a recent death cross. These indicators can provide the actual buy and sell signals used to enter a trade.

You might also look for evening star or abandoned baby patterns that occur on longer timeframes and then dig into shorter timeframes to pinpoint entry and exit points.

Let’s take a look at a real-life example of an evening star in practice. 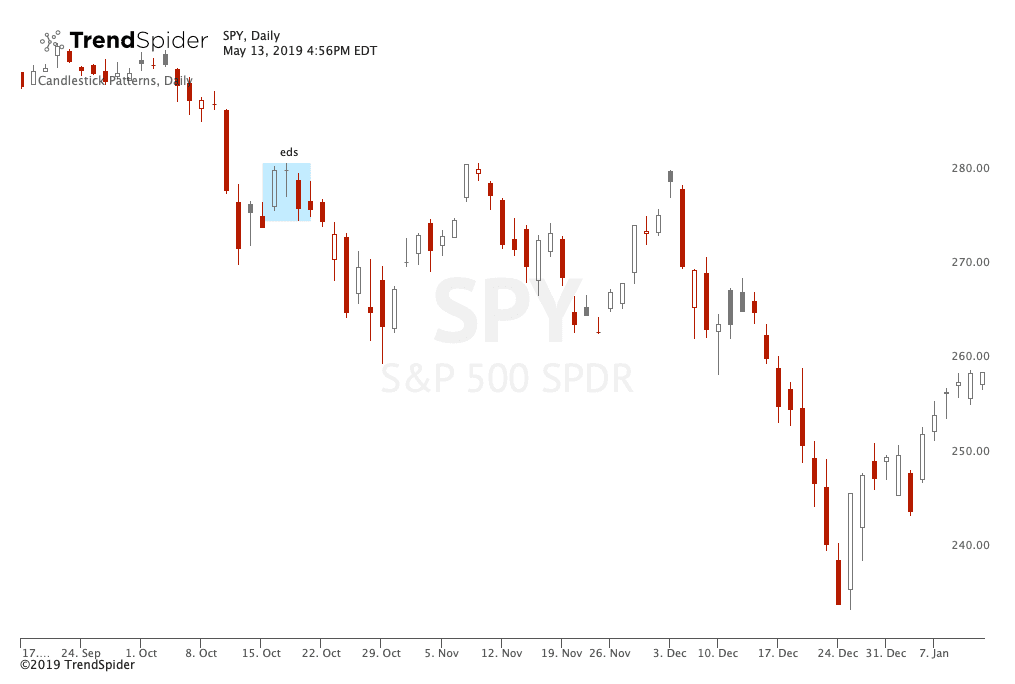 The evening star appeared after a short-term uptrend and correctly predicted a bearish reversal in the following candles. The reversal was short-lived, however, as the price recovered just one month later before resuming its downtrend.

Abandoned baby and evening star patterns are fairly accurate in predicting a reversal, but what happens next isn’t always as clear-cut. For this reason, many traders combine them with other forms of technical analysis to set specific price targets.

Sign up for a free trial to see how TrendSpider can help you automatically identify doji patterns on any chart! And checkout our Ultimate Guide to Candlestick Patterns to discover more patterns.