Candlestick patterns are a great decision support tool for active traders. Bullish and bearish engulfings have an ideal mix of reliability and frequency that makes them a powerful addition to any trader’s repertoire. They can be very helpful for predicting reversals when used in conjunction with other forms of technical analysis.

Let’s take a look at how to find and trade engulfings, as well as some real-life examples of how to use them.

What is an Engulfing? 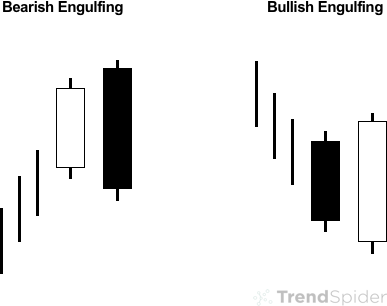 Let’s take a look at the two types of engulfings.

Bullish and bearish engulfings are fairly reliable candlestick patterns on their own, but most traders still seek confirmation before entering a trade.

For example, you might look for an engulfing pattern in combination with a trend line breakout or breakdown. You may also look for the engulfing pattern to occur on higher than average volume that could mean a more robust reversal.

The price target for most engulfing patterns depends on other technical factors. For example, a bearish engulfing that occurs following an extended uptrend could have a price target that’s set using a Fibonacci level or by looking at trend line resistance levels on the way down.

Let’s take a look at a real-life example of engulfings to see how they work in practice.

The following chart shows a series of engulfings that were automatically identified on the S&P 500 SPDR ETF (NYSE ARCA: SPY) chart using TrendSpider. 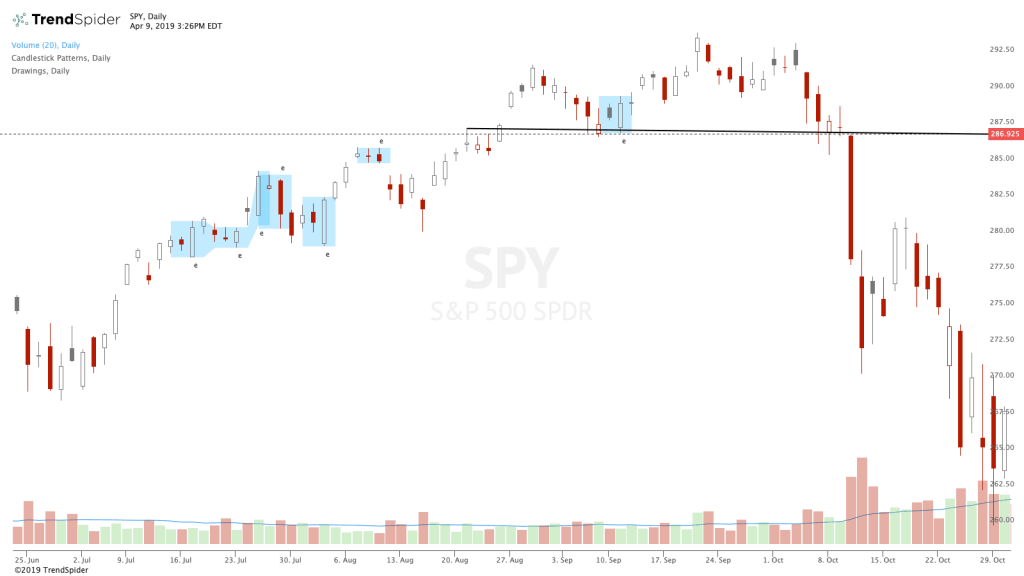 The first series of engulfings occurred during a choppy, sideways market, so those could be safely ignored by traders. The latest bullish engulfing occurred as the stock moved toward trend line support. The ETF continued to move higher following the engulfing to briefly surpass its prior highs, creating an opportunity for significant short-term gains.

Bullish and bearish engulfings are fairly reliable candlestick patterns that are commonly used to predict a reversal. While they shouldn’t be used on their own, they have an ideal mix of frequency and reliability that makes them a powerful addition to any trader’s repertoire.

Sign up for a free trial to see how TrendSpider can help you automatically identify engulfings on any chart!