Government shutdowns have a significant impact on federal employees, government contractors, and many companies relying on government services. Most shutdowns are resolved within a few days and there’s little impact, but in some cases, shutdowns have lasted more than two weeks. These longer stalemates have become increasingly common since the 1990s with shutdowns during Clinton, Obama, and Trump’s administrations.

Let’s take a look at the impact of government shutdowns on businesses and how the three longest shutdowns have affected stock market returns.

What Do Government Shutdowns Mean?

Government shutdowns can affect businesses and the economy in many ways. For example, the Small Business Administration (SBA) is unable to process many loans that are needed by businesses hoping to pay bills or expand operations; the Food and Drug Administration (FDA) can’t process new drug applications or other paperwork to keep clinical trials on track; and, the Commerce Department shutdown is delaying the shipment of products overseas.

Since 1976, there have been more than 20 gaps in budget funding and ten instances where federal employees were furloughed. JPMorgan and Wells Fargo analysts recently estimated that the economy is losing between $1.5 billion and $2 billion per week due to the shutdown. That represents just a fraction of the $20 trillion economy, but it could disproportionately affect certain types of businesses and sectors in the economy.

The impact of a government shutdown on stock returns is difficult to measure since there’s a limit sample size and the macroeconomic environment differs between incidents. That said, there may be certain commonalities for traders and investors to watch.

The Border Wall Shutdown of 2019

The longest shutdown is the ongoing Border Wall Shutdown of 2019, which is still ongoing without any sign of compromise. The shutdown began on December 22, 2018 after Congress and President Trump were unable to agree on the inclusion of $5.7 billion to build security walls or fencing along the border with Mexico. The stalemate has resulted in an estimated 800,000 federal employees working without pay or being furloughed until the government reopens. 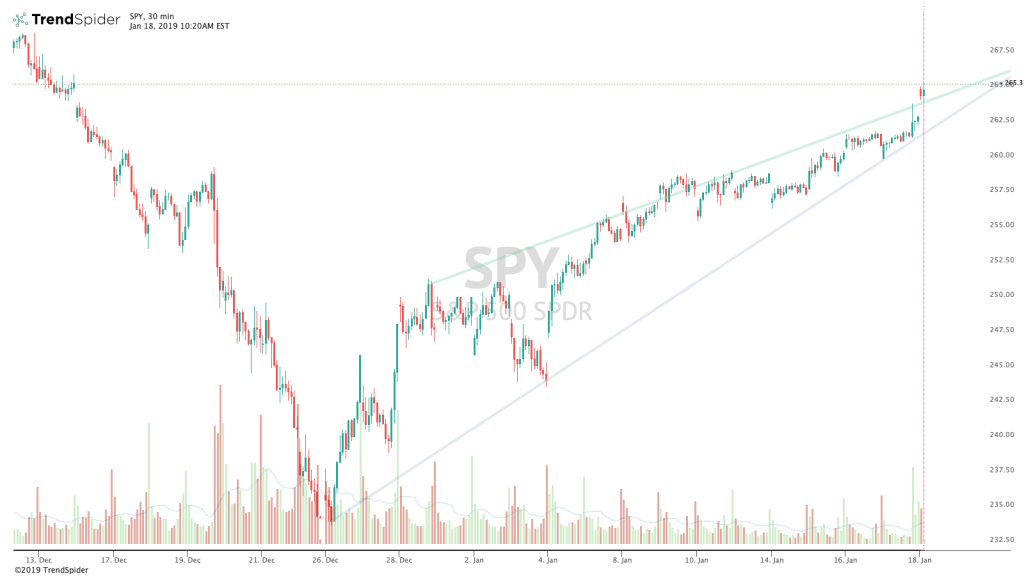 The benchmark S&P 500 index, as measured by the SPDR S&P 500 ETF ($SPY), rose about ten percent between December 22 and January 17. From a technical standpoint, the ETF’s rising wedge suggests that there could be a bearish reversal in the near term but has continued to rise. While the shutdown hasn’t impacted the overall market in a negative way, there has been a wide range of returns between various sectors within the market.

This data shows that the financial and consumer discretionary sectors experienced the best performance with a 13.65% return, while utilities and consumer staples sectors were among the worst performers.

The Obama Shutdown of 2013 was the third-longest government shutdown in history, lasting 16 days between October 1 and October 17, 2013. With the passage of the Affordable Care Act (known as Obamacare), the Republican-led House of Representatives wanted to include language delaying or defunding the Patient Protection and Affordable Care Act as part of the new spending and appropriations bill for the following year.

The benchmark S&P 500 index, as measured by the SPDR S&P 500 ETF (SPY), rose just over 3% during the shutdown on average volume, suggesting that the shutdown had little impact on the overall stock market.

The Clinton Shutdown of 1995 was the second-longest government shutdown in history, lasting 21 days between December 5, 1995 and January 6, 1996. President Clinton couldn’t reach an agreement with the Republican-controlled Congress over funding for Medicare, education, the environment, and public health in the 1996 federal budget, which led to a stalemate.

The benchmark S&P 500 index, as measured by the SPDR S&P 500 ETF (SPY), fell 0.13% on average volume over the period, suggesting that the shutdown had little impact on the overall stock market.

Government shutdowns appear to have little impact on the overall economy and stock market. In fact, stock prices moved higher during two of the three longest government shutdowns. Certain businesses and sectors may experience more of an impact—especially if they rely on key government services—but traders and investors should base their decisions on other factors unless the shutdown impacts specific investments.