If one was to say that they believed in fortune-telling, it would seem crazy to most. However, events in the future can be predicted within a reasonable margin of error with the understanding that human behavior is a measurable mathematical concept at its core and results in predictable outcomes to some degree. Commonly observed conditions/patterns lead to expected outcomes and numerical measurements tip scales at predictable points.

When it comes to reading these statistical probability outcomes which exist in the financial markets, it is not done with a crystal ball, it is by technical analysis of price action on the charts. Technical indicators are the traders’ crystal ball into what insiders and institutions are doing and which direction price might be heading.

In this blog post, we will look at a case study using one such indicator (Bollinger Bands®) and how its relationship to price action may provide insight into the contractions found between current price trends and what insiders are really doing, looking at $FB (Facebook). 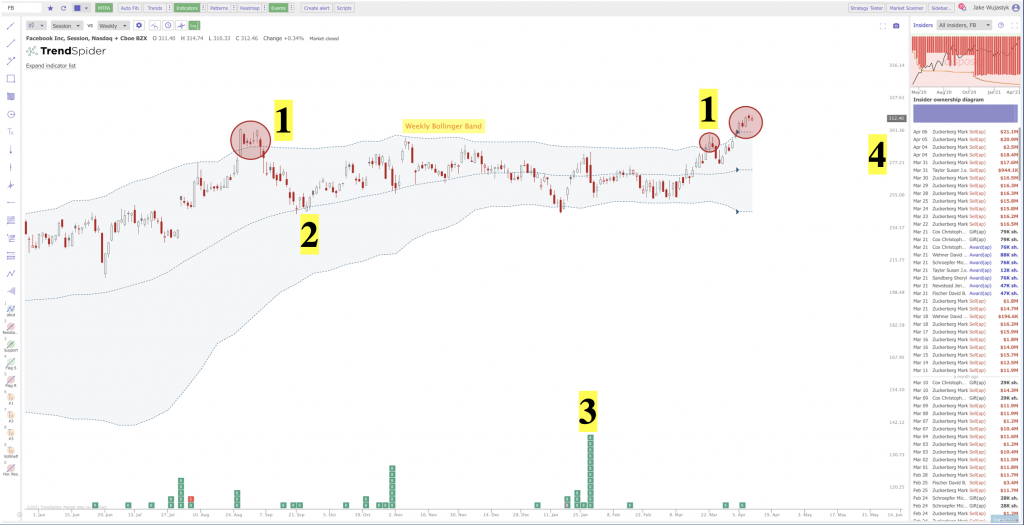 This is a daily chart of Facebook over the last 10 months (since June 2020). As you can see, price has traded in a very tight range and is starting to potentially breakout of this narrow range into the middle of April 2021. In this example, we will go over some interesting discrepancies between analyst estimates/ratings vs. insider selling as well as looking at what happened the last time price was this far outside of the weekly Bollinger Band.

TrendSpider’s Multi Timeframe Analysis tool allows you to overlay larger timeframe candlestick patterns on a lower time frame chart to see how the shorter-term price action interacts with longer-term technical levels. Simply turn on the “Patterns” feature, select the patterns you wish to highlight, turn on the MTFA button, and choose which time frames you would like to view. Read more on MTFA…