The Stock market lived it up to its historical stereotype of being more volatile in the month of October than other months in the year. The signs were there early on that this month may get ugly due to a mix of variables in the financial markets such as interest rates breaking through key levels above, trade war fears, and midterm elections closing in. This blog post outlines the full technical story of October’s moves as we followed the charts week by week through our weekend blog. 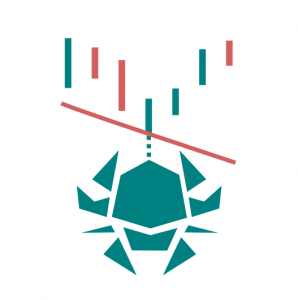 As the markets were showing signs of a large move down right before October started, we wanted to make sure we took snapshots of charts each weekend to see how things materialized. There were many variables at play over the last 5 weeks including fundamental and emotional aspects such as interest rates increasing, trade war fears, and uncertainty into the mid-term elections. However, in this post, we perform a solely technical recap over the last 5 weeks with chart setups before each Monday’s open.

The SPY chart ended the month of September looking about as spooky as it gets on the weekly candle with negative divergence on some very powerful momentum oscillators such as the MACD, RSI, and Williams %R. This is shown by the pink upward-sloping line on the price chart but the downward sloping line on all three lower indicators which show lower highs being created. Another ominous sign was the fact both the SMA (20) and price channel support (yellow trendline) were well below the current price and were, therefore, price targets below to watch for the price to hold. Lastly, October is generally a historically volatile month so that was part of the omen from the beginning. Read the original post here. 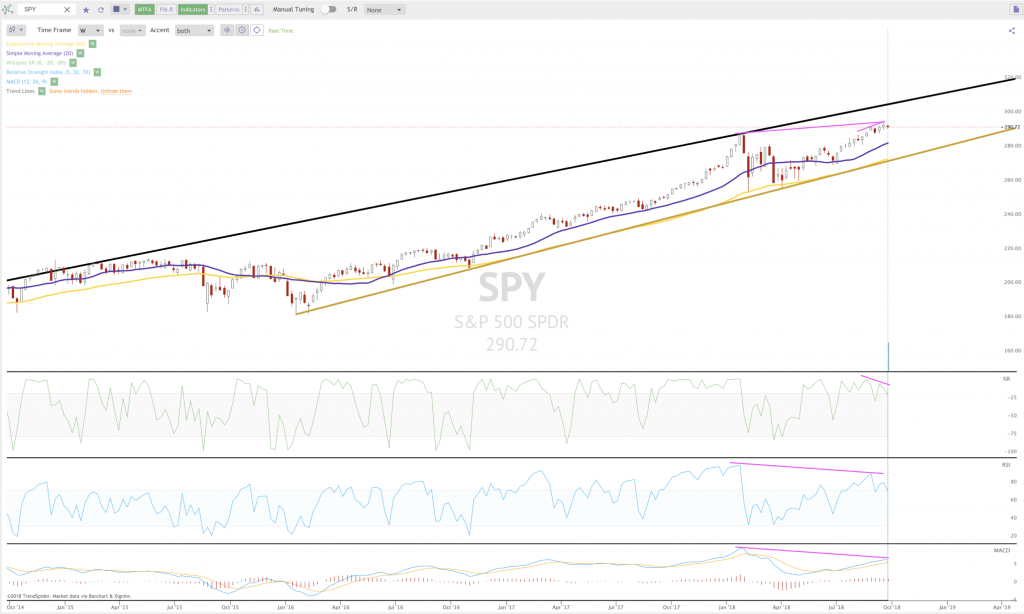 The SPY and broad markets alike started to take a hit quickly as the month of October started off. As you can see in this image, the candle for the week of October 1st had a long, red body which shows sellers were in control from Monday’s open throughout the week into the close on Friday, October 5th.  You can see in the image as well that the %R and RSI both started to move out of overbought levels quickly as the negative divergence continued to materialize. A big red flag into the week of October 15th was the MACD about to make a bearish cross which ended up materializing relatively strong. Read the original post here. 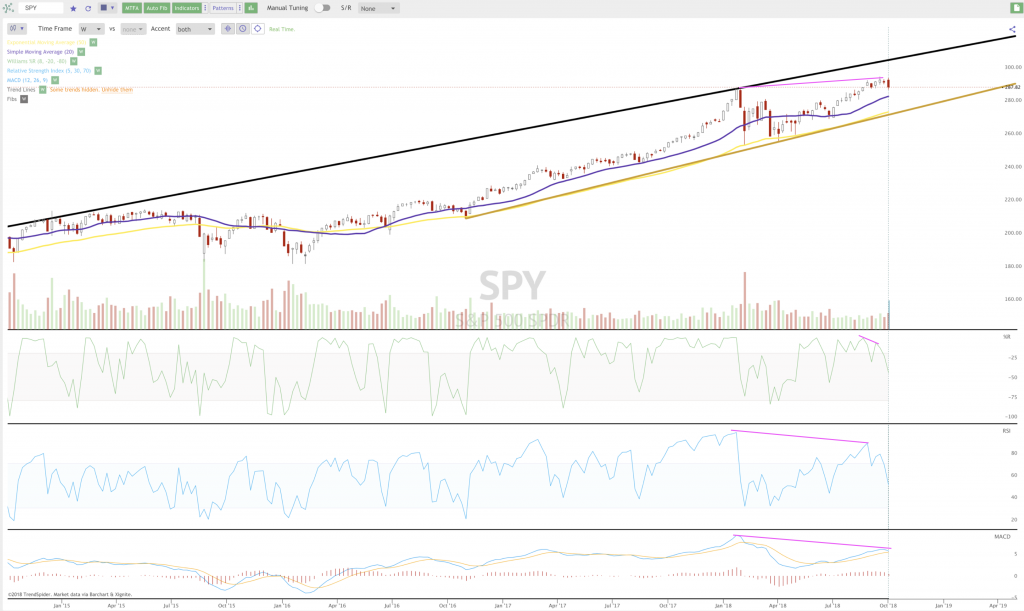 The 3rd week of October is when all hell broke loose. The market took an incredibly hard hit during this 5-day stretch as the bearish MACD cross continued to materialize to the downside. From a price perspective, things started to look decent as the weekly candle bounced right off the price channel support (yellow trendline) but closed right through the SMA (20) which is shown by the purple line. From a lower indicator perspective, both the RSI and %R had not hit oversold levels yet and did have even more downside left into the second half of October. Read the original post here. 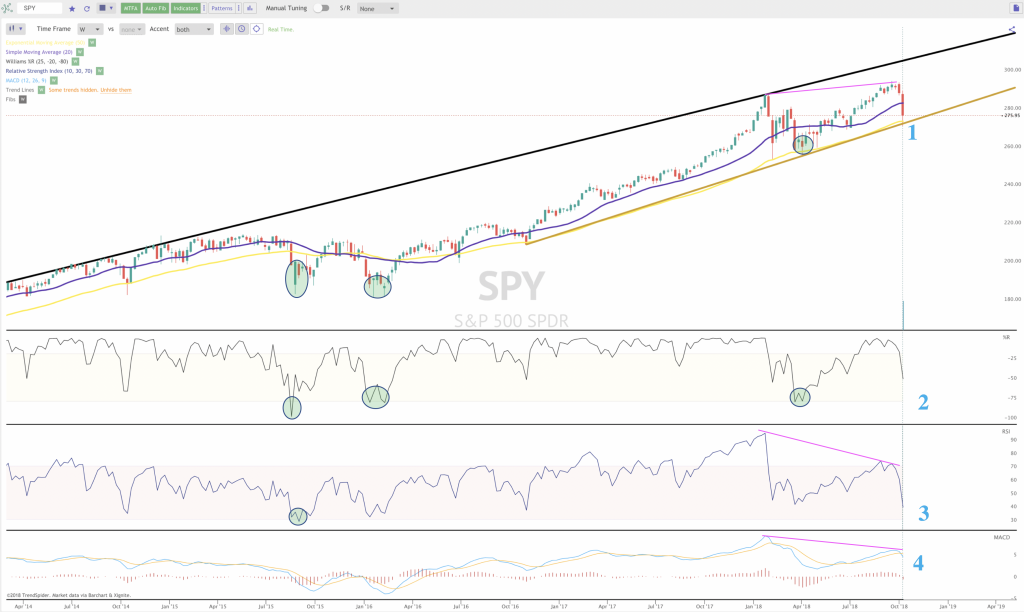 After two weeks of straight red throughout the entire stock market, the weekly candle on the SPY finally started to stabilize right on the new channel support. TrendSpider always finds the most relevant trendlines for the most recent price action and chose a shorter term trendline which was also the trendline where the ETF found a bottom in early 2018. At this point, the lower indicators started to show oversold levels that have been seen in past market reversals. However, the market still had some spooky scare tactics left… Read the original post here. 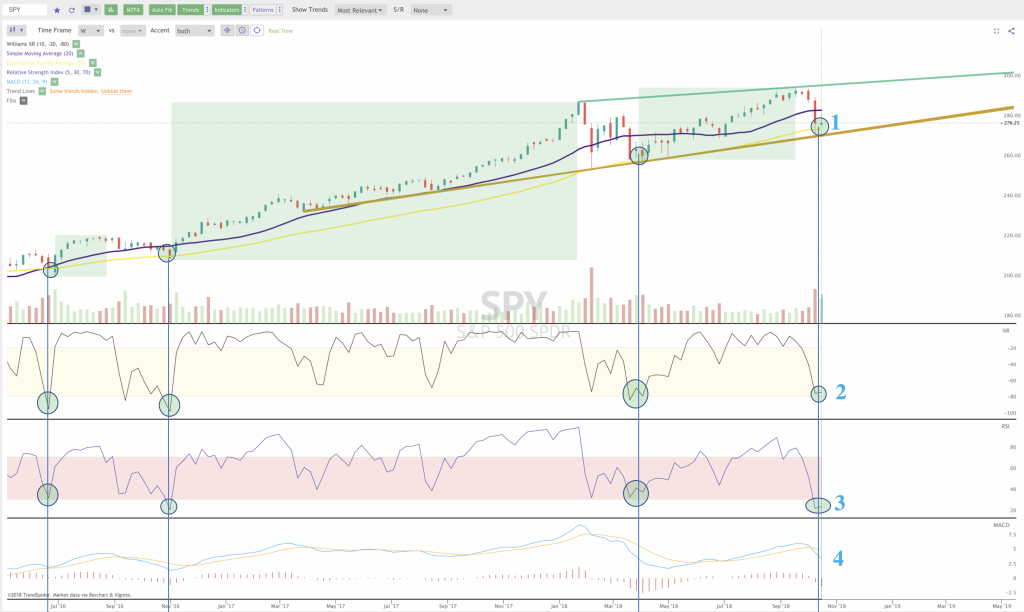 The SPY entered the final week of October’s trading with a breakdown of the previous price channel support (yellow trendline) and a new trendline (black trendline below) identified on TrendSpider’s manual tuning mode. To learn more about how to add your own trendlines or tweak your settings, click here. Looking back at previous oversold patterns in the past (shown by the green rectangles), the SPY was now in a position that it has only been in five other times in the last 3.5 years. As the market nears midterm elections, the chance of this pattern breaking down is very much possible and more confirmation will be needed. Read the original post here. 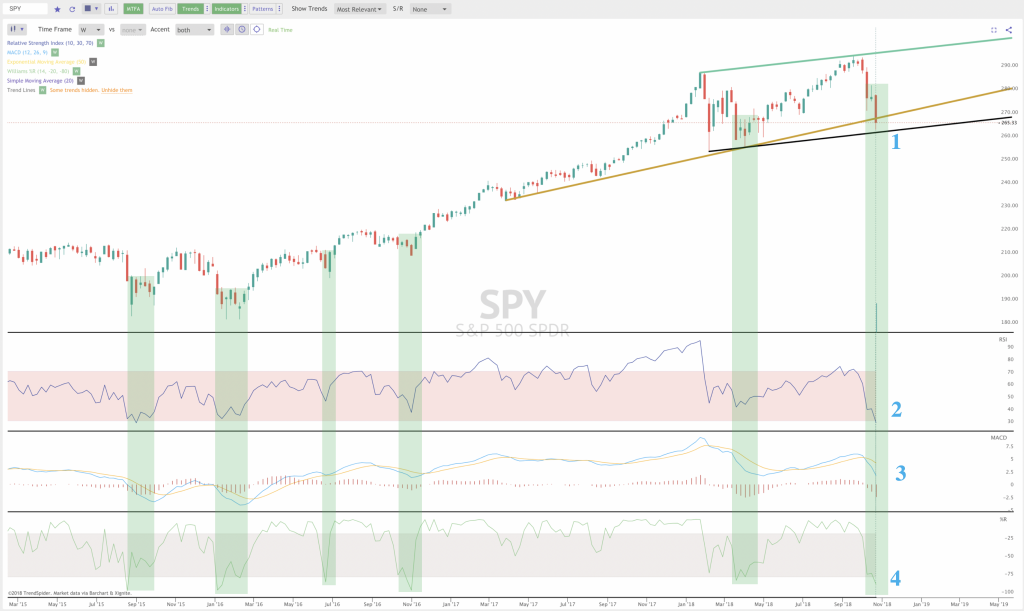 In conclusion, the stock market can be very unpredictable with emotion being a big player in large downturns like this one. However, there are tools you can use to get an edge in the market such as lower indicators and simple trendlines shown on these charts. To learn more about how to use these different strategies when performing technical analysis on the TrendSpider platform, check out our TrendSpider Strategy Guide Blog.